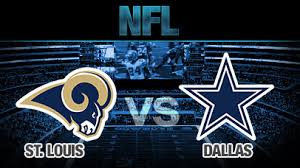 Note – Jason’s pick below – the Bettorsworld Pick by Friday

The Cowboys have won three in a row and eight of their last nine Games. They got over years of playoff disappointment with a home win over the Seattle Seahawks in the Wild Card round and they lead to LA LA LAnd as 7-point underdogs facing the Rams. Dallas has Ezekiel Elliot, who led the league in rushing this season, and a defense that ranks 7th in the league. That D will be tested in this Game facing a Rams’ team that has the league’s 2nd ranked offense.

After losing two Games the Rams rebounded and won their last two Games of the season. They have the offense with Jared Goff and Todd Gurley, but the defense is a coNCern. They GAve up at least 30 points in two of their last three Games and overall they only rank 19th in the league on defense.

At 5Dimes sportsbook the Rams are a 7-point home favorite with a total of 49.

These met last season in Dallas where the Rams beat the Cowboys 35-30.

In the Wild Card round of the playoffs last weekend the Cowboys were at home and they beat the Seattle Seahawks 24-22. They outGAined Seattle 380 yards to 299 yards, outscored them 14-8 in the 4th quarter, and they rushed for 164 yards while only giving up 73 rushing yards.

Dak Prescott passed for 226 yards with a TD and a pick and Amari Cooper was his main target with 106 receiving yards. Elliot was the big star in the Game not only rushing for 137 yards, but also making Four catches for 32 yards. The Rams’ defense ranks 14th in the league against the run, but only 23rd against the run, which is, obviously, a major coNCern facing Elliot.

In their last Game of the regular season the Rams were at home and beat the San Francisco 49ers. They were outGAined 391 yards to 377 yards, but they forced Four turnovers while not committing any.

Goff passed for 199 yards with Four TD and no INT in the win over San Fran and Brandin Cooks and Josh Reynolds combined for 117 receiving yards and Four TD. Todd Gurley did not play in the 49ers Game resting his injured knee. He had been in the MVP debate, but in his last two Games he only rushed for 76 yards.

Over record of 4-0 in their last 4 home Games

Jason’s Pick: The Rams did not look great in their last few Games of the season, but after throwing five INT in two Games Goff was not picked off in his last two Games. He will play well and Gurley will as well, but the Rams will not be able to contain Elliot. The Cowboys will keep this Game close and while I don’t see them winning in L.A. they will cover the spread getting seven points.

Bettorsworld Pick – We mentioned in the Chiefs write up how home field didn’t mean much in the Wild Card round last week. Well,  home field hasn’t been all that important in this round either, especially from a betting standpoint. ACCording to The Gold Sheet, road dogs are 32-23-2 since 2004 in the Divisional round.

Certainly the Rams aren’t  known for having a great home field edge. True, they were 7-1 this year at home, but that record was compiled as a result of being very good (offensively) and zero to do with LA being a difficult place to play for road teams.

But keep in mind, teams don’t do well at home strictly because of stadium advantages. They also do well at home because other teams don’t do well on the road. That’s the case with the Dallas Cowboys. We think the Cowboys are an average team to begin with. Somehow, they managed to go 7-1 at home and were also able to win there in the Wild Card round. But on the road, they were a 3-5 team and simply not very good.

The Cowboys 18.7 offensive yards per point number for the is the worst of all playoff teams and one of the worst in the NFL (only the Jags, Bills and Raiders were worse). It shows a huge difficulty in turning yards into points on the road. While the Rams 12.2 offensive number shows the ease of which they were able to find the end zone.

The Cowboys defensive number is good. Certainly better than the Rams. However, the Rams aren’t here because of their defense.

You can discard the Cowboys 36 points against the Giants in the final week of the season in a meaningless Game. Now, compare the two. The Cowboys point production on the road was anemic. While the Rams couldn’t be stopped, with the exception of the Eagles holding them to 23 in their only loss at home all year.

The Cowboys are going to try to play their Game, run Ezekiel Elliott often, control the clock, keep the Rams offense off the field and as a result, keep the Game low scoring. In theory, that sounds great. But not too many teams have been able to pull that off this year.

What happens when the Rams put a few points on the board and the Cowboys can no longer play their Game? Do we trust Dak Prescott to air it out and go head to head with Goff and the potent Rams offense?

The Rams were a playoff team a year ago. We think they take the logical step of advaNCing this year. Should they do so, it’s likely they’ll get the cover here. Rams -7