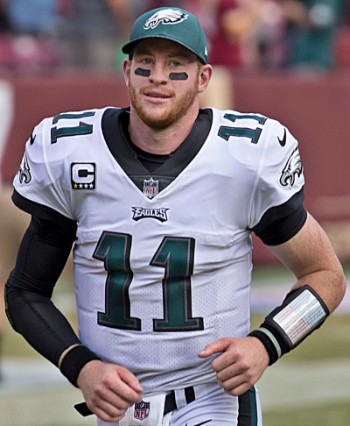 A couple of one-win teams hook up in the City of Brotherly Love where the Eagles are a six-point favorite hosting the Lions with a total of 45.5.

The public has backed the visiting Lions in this NFC matchup, as they opened as an 7.5-point underdog and now are 6-point dogs.

The Lions are coming off a solid defensive effort in their last game, which was a 13-10 win over the L.A. Chargers.

The Eagles lost to the Atlanta Falcons 24-20 in their last game where Atlanta gave them many chances for the win.

In their win over the Chargers last week the defense saved the day, as they picked off a Phillip Rivers pass in their end zone with just over a minute left to ice the game. The big defensive play was needed in a game where Detroit was outgained 424 yards to 339 yards.

Matthew Stafford passed for 245 yards with two TD and two INT and his 4thquarter TD drive ended up being the game-winner. Kenny Golladay had a big game with 117 receiving yards and the run game was not good with 94 yards with Kerryon Johnson leading the way with 41 rushing yards only averaging 3.4 yards per carry.

Stafford will be facing an Eagles’ defense that has not played the pass well on the season but has stuffed the run.

The Detroit defense held Phillip Rivers and the Chargers offense in check, and can they do the same against Carson Wentz and the Eagles?

Birds had their Chances

The Eagles had their chances to leave Atlanta with win in their last game but gave up a long TD on 4th down late in the 4th quarter and also squandered other chances in the 2nd half.

The Eagles were outgained 367 yards to 286 yards and neither team ran the ball well and both teams had three turnovers.

Wentz passed for 231 yards with a TD and two picks and Nelson Agholor and Zach Ertz combined for 179 receiving yards. Wentz got little help from the run game to the tune of only 49 yards on a 2.3-yard per carry average.

Philly is banged up in their WR corps already with DeSean Jackson listed as doubtful for this game and Alshon Jeffrey listed as questionable.

It is key that the Eagles go back to their blueprint used in their opening game against the Redskins where they ran the ball well and Wentz was not picked off. Mistakes and turnovers cost the Eagles the last game and they cannot afford to repeat that facing a Lions team that comes into this game with a lot of confidence.

In another interesting trend the Eagles are 0-5 ATS in their last five games in September.

Wentz will get it done in this game limiting turnovers and even shorthanded will have a solid game. The Eagles will come out of the blocks firing after smarting from losing their last game. The Lions will run into a buzz-saw and I predict a big win for Philly easily winning and covering the spread.