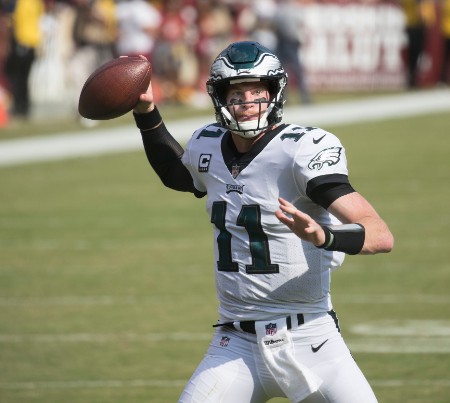 The undefeated Green Bay Packers opened as 3 point favorites over the Eagles this week only to see one way action move this line to -4.5. The total is 45, down from an opener of 48 at betonline.

The 1-2 Eagles have gotten off to a bad start and they head to Green Bay to face the Packers on Thursday night where they are a 4.5-point underdog with a total of 46.

These teams have not faced each other since the 2016 season.

The Eagles have lost two in a row after winning their season opener and both losses were against teams that failed to make the playoffs last season. On top of that Philly has failed to cover the spread in any of their three games this season.

In their last game the Eagles blew some key chances to get the W in their 27-24 home loss to the Detroit Lions. They outgained the Lions 373 yards to 287 yards, but they had two key penalties very late, Carson Wentz’s bomb with a minute left should have been caught for a TD, and Philly dropped seven passes.

Wentz passed for 259 yards with a couple of TD’s and no INT and RB Miles Sanders led the team rushing for 53 yards and also led the team with 73 receiving yards.

The short week is not good for the Eagles at all, as in the Lions loss they were without the WR duo of DeSean Jackson and Alshon Jeffery. With them gone the Philly receiving corps struggled to get open and the team needs them to get back on the field. However, it looks as if Jackson will miss this game and Jeffery is questionable.

The Eagles will be tasked with facing a resurgent Green Bay defense that has only given up an average of 11.7 ppg in their three wins.

Been a long time when the defense was the strength of the Packers but that has been the case through three games this season. They beat the Denver Broncos 27-16 in their last game where they only had two more overall yards (312-310 but forced three turnovers and had six sacks.

Aaron Rodgers had a decent game passing for 235 yards with a TD and no picks, but the offense has not put it together. He even stated after the game that he wants to play better and score more points.

Rodgers had passed for 647 yards with four TD and has not been picked off but only ranks 19th in the league with a QBR of 45.7. The team has tried to run the ball but with not much success only ranking 24th in the league averaging 89.3 rushing yards per game.

The Eagles have been less than impressive on defense early this season and in their loss to the Lions in their last game gave up 246 passing yards and 127 rushing yards.

The road team has covered the spread in four of the last five games between these teams but do not look for that to continue. The Packers have played great defense and while their offense has been spotty, they have played three solid defensive teams.

The Eagles are not in that category and this Thursday night at Lambeau the Packers will have a complete game easily winning and covering the spread.