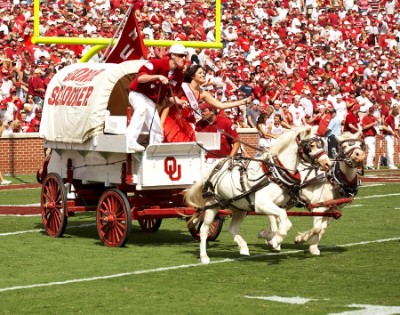 The Oklahoma Sooners host Texas Tech this week as 27 point favorites with a total of 71.5 at betonline. It should come as no surprise that the Sooners are drawing the majority of the betting action.

New quarterback, no problems for Oklahoma, who continues to score for fun. Texas Tech was one of the only teams to give the Sooners some trouble last year.

Both offenses did whatever they wanted in last year’s 51-46 Oklahoma win. The main reason Texas Tech had a chance was that Kyler Murray tossed a couple picks.

Outside of that, OU did no wrong, running for 323 yards in addition to Murray’s 360 passing yards. The difference this year is that Oklahoma has covered the last three meetings between these teams played in Norman.

Texas Tech not the Same

This isn’t the same high-flying Texas Tech with Kliff Kingsbury as it lost 28-14 to Arizona last weekend.

The Red Raiders rolled their first two opponents, but it was clear against Arizona that this offense isn’t the same. Alan Bowman is averaging just 6.6 yards per attempt, throwing three picks to go with six touchdowns.

The ground game has probably been the more impressive part to the offense as Armand Shyne is averaging 7.4 yards per carry for 238 yards. The problem is that running the ball isn’t going to work against Oklahoma, especially since that didn’t work against Arizona.

In addition to OU holding Tech to 4.0 yards per carry in last year’s meeting, this defense has looked a tad better in the first few games. Sure, opponents have been iffy, but prior Sooner defenses allowed points to everyone.

The same goes for the Red Raiders because their defense clearly doesn’t match the numbers. They controlled the first two games, but even with a new coach, this team isn’t going to hold down Oklahoma. In fact, the Sooners have scored at least 51 points in each of the last four meetings.

The Sooners have had zero problems with Jalen Hurts at quarterback and that won’t change in this game. In addition to averaging 14.4 yards per attempt on 80.3% completion, he leads the team with 373 rushing yards on 9.8 yards per carry.

Those numbers will go down at some point, but this isn’t the defense to limit him. Then you throw in running backs Trey Sermon and Kennedy Brooks, as well as wide receivers Charleston Rambo and CeeDee Lamb, and the speed is neverending.

There are few reasons to back the Red Raiders after they managed 14 points against Arizona. Texas Tech has covered its last six following a bye week, while Oklahoma is 4-0-1 ATS following a straight-up win.

The over has hit in seven of the last eight meetings between these schools and Oklahoma is 6-1 ATS in the last seven at home.

Our Pick – After reading the above article you might think we’re going to go with the Sooners with an easy blow out win.

Well, we can certainly see that scenario playing out. However, we need to point out that our model sees something it likes with the Red Raiders. It’s predicted margin is just two TD’s.

The problem is that each team has played just 3 games and our model really requires a minimum of 4. So be careful, this one may not be as easy as it seems.