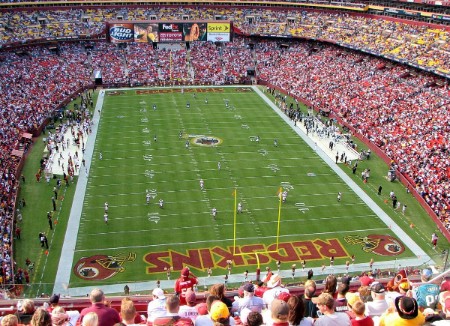 The Philadelphia Eagles head to the Nation’s Capital to take on the Washington Redskins in a big NFC East showdown where they are a 4.5-point favorite with the total sitting at 40.

The public has slightly backed the Eagles in this division matchup, as they opened as a 4-point favorite and as of Thursday are a 4.5-point favorite.

The Eagles snapped their three-game losing streak in their last game with a 23-17 OT win over the New York Giants. Even at 6-7, they are tied for first place in the NFC East with the Dallas Cowboys, who they host next week.

The Redskins had their season-best two-game win streak snapped in their last game but only lost to the Green Bay Packers 20-15 where they were 13-point road underdogs. However, they lost RB Derrius Guice for the season with another knee injury and the old-dog Adrian Peterson will have to play well in this game carrying the load in the backfield.

These teams met in the first game of the season in Philadelphia where the Eagles beat the Redskins 32-27.

The Eagles had covered the spread in four straight games against the Redskins but did not do so in the 32-27 win in the season opener where they were 10.5-point favorites.

The Eagles needed a W in their last game, and they got it with the 23-17 win over the Giants in OT where Carson Wentz brought the team back from a 17-3 halftime deficit. Have to give some credit to the Philly D in the win, as they shut out the Giants in the 2nd half.

Wentz passed for 325 yards with two TD and no INT, but his two scoring passed were not until late in the 4thquarter and then in OT.

The Eagles did rush for 118 yards with Boston Scott and Miles Sanders combining for 104 yards. Sanders leads the team in rushing yards and after two solid games, he rushed for 45 yards in the win over New York but only averaged three yards per carry.

Wentz has had to deal with injuries to his WR corps, but he did come through in the last game and in the season opener against the Skins he passed for 313 yards with three TD and no INT.

The Redskins’ defense has played much better in the last few games and on the season they rank a legit 11th in the league in pass defense but only 27th in pass defense.

Rookie Has to Do More

The Redskins rank dead last in the NFL in passing yards per game and rookie Dwayne Haskins has not put up big numbers and has seven INT while only having three TD. Washington won their two games before the loss to Green Bay because of their run game and the rookie QB has to show more in this division matchup.

Adrian Peterson has totaled 175 rushing yards in his last two games but only averaged 3.8 yards per carry in the loss to the Packers. With Guice now on IR the old man will get a heavy workload in this game and he was a healthy scratch in the first game of the season in the loss to the Eagles.

Philly ranks 3rd in the league in run defense but only 17th in pass defense.

Washington has looked like a much better team in the last few games, but the big question is can Haskins step it up? I think he will in this game keeping the Skins close. Wentz will find a way to get it done as he did in the win over the Giants but like last week Washington will, at least, cover the spread.