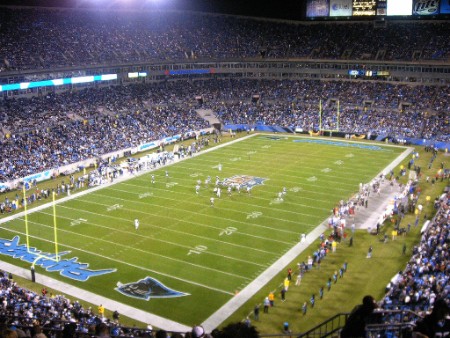 The Seahawks are coming off a costly loss and head to the south to take on the reeling Carolina Panthers where they are a 6-point favorite. The total for this NFC matchup is 48.5.

The Seahawks had their five-game win streak snapped in their last game with a 28-12 loss to the L.A. Rams. Their offense had been clicking in the win streak and with the loss they dropped back in the Wild Card picture one game back in the NFC West of the San Francisco 49ers, who they host in the season finale.

The Wheels have fallen off for the Panthers, who have lost five in a row, fired their coach in the process, and were crushed 40-20 to the hands of the Atlanta Falcons in their last game.

In their five-game skid, the Panthers have given up an average of 31.2 ppg.

Seattle only scored 12 points in their last game against the Rams and was outscored 21-3 in the first half. On top of that, they were outgained 455 yards to 308 yards.

This season the Panthers are 2-4 at home and the Seahawks 6-1 on the road with their lone road loss being last week in L.A.

Seattle had to abandon the run in the last game against the Rams being down big at the half even though Chris Carson rushed for 76 yards and averaged a legit 5.1 yards per carry. He ranks 7th in the league in rushing yards and will face a Panthers’ run defense that ranks 29th in the league. On top of that Carolina allowed Atlanta to rush for 159 yards and their rushing offense ranks 3rd to last in the NFL.

Russell Wilson did not help his MVP cause in the loss to the Rams where he passed for 245 yards with no TD and was picked off and sacked five times. No doubt, he has had a solid season but in his last four games he has only four TD and in that span has thrown four of his five INT of the season.

Carolina ranks in the middle of the pack in terms of pass defense, but they gave up over 300 passing yards in the loss to the Falcons.

After losing to the lowly Redskins the Panthers lost to the Falcons last week where they gave up a ton of yards and had four turnovers without forcing any.

Kyle Allen got off to a solid start to the season when he took over for Cam Newton but in his last four games, he has five TD and seven INT and has been sacked a whopping 21 times.

Christian McCaffery has played well in the passing game despite the bottom falling out for the Panthers and in his last four games has 330 receiving yards. While he ranks 3rd in the league in rushing yards he has not rushed for over 70 yards in his last four games and in two of them he failed to average over 3.1 yards per carry.

Seattle’s defense did not play well at all in the bad loss to the Rams in their last game and they rank 29th in the league, yes 29th, in pass defense and 13th in run defense.

The Seahawks had covered the spread in four straight games before failing to do so in the loss to the Rams last week.

Carolina is a mess and the Seahawks will easily win this game behind a strong rushing attack. Seattle will win and cover sending the reeling Panthers to their 6th straight loss.