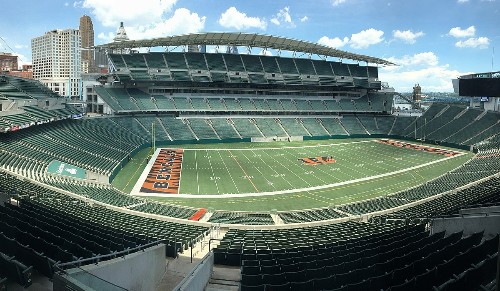 The suddenly hot New York Jets host the road to take on the winless Cincinnati Bengals where they are a 3.5-point favorite with a total sitting at 41.

No shock the Jets have been the public’s pick, as they opened as a 1.5-point underdog and as of Thursday morning are a 3.5-point favorite.

The Jets have won three in a row and Sam Darnold and the offense has been on fire with the team scoring 34 points in each of their last three games. As crazy as it sounds the Jets are still in the playoff picture but will likely have to win out.

The Bengals have been a mess all season and if there was any reason to tank the rest of the way they make a good case. Andy Dalton is back as the starting QB with rookie Ryan Finley playing bad in his few-game tryout with the team. Dalton is a free agent and Finley is not the answer and the fans have already been calling for the team to draft Ohio native and LSU QB Joe Burrow.

Cincy’s defense has, actually, played well in the last couple of games but the offense, which ranks 31st in the league, has only scored 10 points in each of the last two games.

These teams have not met since the 2016 season and the home team is 6-2 ATS in the last eight games between these AFC foes.

In their last game, the Jets faced the playoff-hopeful Oakland Raiders and dominated them on both sides of the ball in a 34-3 win. They outgained the Raiders 401 yards to 208 yards and only gave up 68 rushing yards.

Darnold passed for 315 yards with two TD and no INT in the win over Oakland and in the Jets’ 3-game win streak he has seven TD and only one pick.

Le’Veon Bell has not had much success in his first season with the Jets after signing a big contract with them but in the win over the Raiders, he rushed for 49 yards, leading the team, and also had five catches for 59 yards.

Bell may pad his stats in this game facing a Cincy run defense that ranks dead last in the NFL. The Bengals rank 22nd in the league defending the pass and their secondary has looked pretty good in the last couple of games.

Just Give it Up

The Bengals will not tank for the season, but they should after what has been a disaster of a season. They are the only winless team in the NFL and the Finley experiment at QB was bad. Dalton is back under center and while he has stated he wants to win games why would the team want that since he is a free agent and will, likely, be gone after the season, and the team needs a high draft pick to take a QB.

While Dalton put up yards while he was starting he only had nine TD to go with eight INT.

Joe Mixon leads Cincy in rushing yards on the season and after struggling for most of the season he has been a spark for the offense in the last few games. In his last three games he has averaged 93 rushing yards per game but will be facing a Jets run defense that is the top-ranked unit in the league.

Dalton will be facing a New York pass defense that ranks 19th in the league, so look for him to air it out often.

The Jets have covered the spread in their last three games and the Bengals have failed to cover in four of their last five games.

In the Bengals last 10 home games, they have covered the spread one time. After this game that will stay the same, as Darnold will have another solid game and the defense will keep the Bengals in check. I see the Bengals losing another close game, but the Jets will win their 4th in a row and cover the spread.