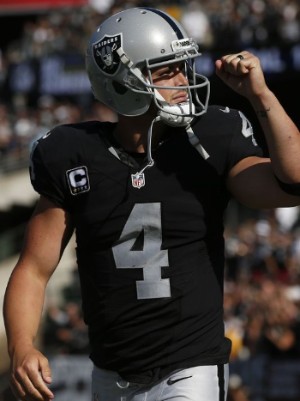 The Minnesota Vikings host the Oakland Raiders as -8.5 point favorites, up from an opener of -7 at betonline. The total of 43.5.

The last time these teams met it was in the 2015 season. The Vikings covered in that game as a slight underdog and the underdog has covered the spread in five of the last six games between these teams.

This game is Oakland’s first of the season on the road and they have failed to cover on the road in six of their last seven games.

Four Quarters of Defense Would Be Nice

In their last game the Raiders lost to the Kansas City Chiefs 28-10 where they gave up all 25 points in the 2nd quarter. They shut out the dynamic Chiefs for three quarters but were torched in the 2nd one and allowed reigning MVP Patrick Mahomes to pass for 443 yards.

The Raiders did play great D against the run holding KC to only 31 rushing yards and the frustrated Mahomes for much of the game.

Derek Carr passed for 198 yards in the loss to Kansas City and had a TD but was picked off twice.

First round draft pick Josh Jacobs rushed for 99 yards including a 51-yard run in the loss to the Chiefs, but he is nursing a groin issue and is questionable for this game. If he cannot go the Raiders may be in big trouble.

The Vikings were on the road in their last game where they lost to the Green Bay Packers 21-16 and had their chances but could not come back. They gave up all 21 points in the first half and outgained the Packers 421 yards to 335 yards but had four turnovers and only managed six points in the 2nd half.

Kirk Cousins had a tough game only going 14/32 for 230 yards and while he had a TD, he was picked off twice and also lost a fumble. He has the weapons with Dalvin Cook in the backfield and a great WR duo in Stefon Diggs and Adam Thielen, but he has to be more consistent and hold onto the rock. The Vikings were 0/2 in the red zone while the Packers were 3/3.

Cook rushed for 154 yards including a 75-yard TD burst and after two games he already has 265 rushing yards. He will be facing an Oakland defense that has defended the run well this season.

The Vikings did not cover last week, and they have covered the spread in five of their last six games following an ATS loss.

So, which team will rebound in this game? Both teams had flashes of great defense in their last game and which team can sustain that?

I would have to say the Vikings in that aspect considering they have the names on D and have been solid on that side of the ball for some time. However, I look for Carr and company to test that defense and while they will likely not get the win they will cover.