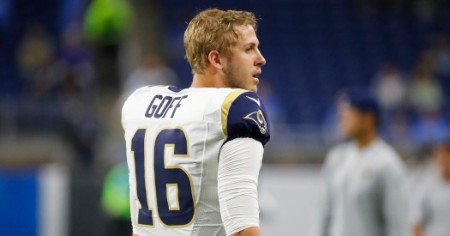 The Buccaneers head to La La Land to take on the 3-0 Rams, who are big 10-point favorites in tis NFC matchup with a total of 49.5.

Even as big betting favorites the public has been backing the Rams at home, as they opened as a 9.5-point favorite.

The Bucs looked like they were well on their way to their 2nd win in a row in their last game but allowed the Giants to come back from an 18-point halftime deficit in the 32-31 loss.

The defending NFC champion Rams are 3-0 and they rank 2nd in the league in rushing yards per game. The offense has not really clicked yet, but the defense is getting it done holding their opponents to only 22 points in their last two games’

The Rams have covered the spread in their last six games facing the Bucs.

In their 32-31 loss to the Giants in their last game the Bucs have more overall yards (499 to 384) and fewer turnovers (2-1) but still took the loss with the Giants mounting a big 2nd half comeback. It also did not help that the Tampa offense stalled in the 2mnd half only scoring three points while scoring 28 in the first half.

Jameis Winston passed for 380 yards with three TD and a pick in the loss to New York and Mike Evans had a big game with 190 receiving yards. Ronald Jones and Peyton Barber combined for 128 rushing yards and Jones led the Bucs with 80 yards averaging 5.7 yards per carry.

Tampa faces Aaron Donald and a stout L.A. defense that has defending the pass and the run well this season.

Winston is on the hot seat as the starting QB for the Bucs and he has the weapons but needs protection and has to avoid the turnover.

Defense Gets the Credit

The Rams beat the Cleveland Browns on the road 20-13 in their last game where their defense was the big star only giving up 270 total yards.

L.A. has been led by the ground game but did not run the ball well in the win over the Browns to the tune of 90 rushing yards. Todd Gurley only rushed for 43 yards and averaged a weak 3.1 yards per carry.

Jared Goff has yet to get it going this season and while he passed for 269 yards with two TD against the Browns, he was also picked off twice. Brandon Cooks and Cooper Kupp combined for 214 receiving yards and Kupp caught both TD passes.

Tampa Bay’s pass defense has not been great this season, but their run defense has holding opponents to an average of 69.7 rushing yards per game.

While the Bucs are a solid 3-0-1 ATS in their last four road games they face a Rams team that has covered the spread in seven of their last eight games.

The underdog is 9-3-1 ATS in the last 13 games between these teams and look for that to continue. The Bucs have their issues and the Rams are playing great defense, but Winston will have a big game and Tampa Bay will keep it pretty close. They may not win but they will cover getting 10 points.