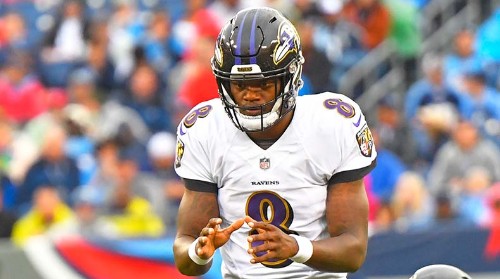 In a matchup of a couple of 2-0 teams in the AFC the Kansas City Chiefs are a 6.5-point favorite over the Baltimore Raven with a total sitting at 54.5.

The Ravens have won both of their games, but they have come against the Miami Dolphins and Arizona Cardinals, who have no wins between them. They did not cover the big 13-point spread in their 23-17 win over the Arizona Cardinals. However, they have covered in their last four road games and covered last season at Kansas City in a 27-24 overtime loss to the Chiefs.

The Chiefs are, not surprisingly, 2-0 with wins over the Jaguars and Raiders and reigning MVP Patrick Mahomes has picked off right where he left off. KC ranks first in the NFL in passing yards per game and fourth in points per game, so the Ravens’ defense has their work cut out for them.

While the Chiefs have covered the spread in four of their last five games, overall, they have failed to cover in five of their last seven home games.

Jackson Does it All

In their last game the Ravens were at home and beat the Cardinals 23-17 where Lamar Jackson did it all. He passed for 272 yards with a couple of TD’s and was not intercepted and he also led the team rushing for 120 yards.

The Baltimore WR duo of Mark Andrews and Marquise Brown combined for 198 receiving yards in the win over Arizona and off-season addition Mark Ingram had 47 rushing yards and 30 receiving yards.

Jackson has been solid in his first two starts and while the Chiefs’ defense is not a good one, they stuffed the run in their last game.

Last season in the overtime loss to the Chiefs Jackson passed for just under 150 yards and was tied for the team lead rushing for 67 yards.

Even without star WR Tyreke Hill Mahomes has not missed a beat so far after two games passing for 821 yards with seven TD and he has not been picked off.

While he had 443 passing yards and four TD in the Chiefs 28-10 win over the Oakland Raiders all four TD came in the 2ndquarter and for the other three quarters KC was shut out.

The lack of a run game is an early season concern for the Chiefs, who rushed for only 31 yards in the Raiders’ win. LeSean McCoy has not busted out yet and has to some time with every team the Chiefs played focusing on the pass.

Mahomes faces a Baltimore pass defense that gave up 329 passing yards in their win over Arizona.

This season is still young and as statistical handicappers, well, we don’t quite yet have enough data to rely on our model.

With that in mind, when using the model early in the season, we combine this years stats with some of last years.

When doing so, our model comes up with a predicted score of KC 31 Baltimore 28.