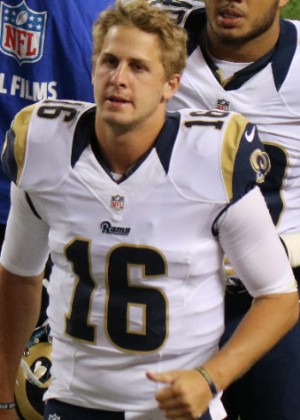 Both the Saints and the Rams won their season openers and in a rematch of last season’s NFC championship game the Rams are only a 2.5-point NFL betting favorite at home with a total of 52.

The Saints had some Drew Brees magic and a 58-yard field goal winning kick to win a 30-28 win over the Houston Texans. Th Rams were on the road to begin their season last week and took advance of three turnovers in a 30-27 win over the Carolina Panthers.

In last season’s NFC title game in New Orleans the Rams beat the Saints 26-23 in OT.

The home team has covered the spread in seven of the last eight games between these teams and the Rams are 7-3 ATS in their last 10 games, overall, against the Saints.

The Offense is There

Even in only winning by two points on a last second field goal in their win over Houston last week the Saints still ranked up over 500 total yards.

Brees quieted his critics after the late last season slump with 370 passing yards and a couple of touchdowns and he was intercepted once. Michael Thomas, who got a big contract in the offseason, and Ted Ginn Jr. combined for 224 receiving yards and Ginn Jr. made the catch with two seconds left in the last game to set up the field goal.

Alvin Kamara showed in the Texans game that he is a key piece to the Saints offense rushing for nearly 100 yards and having 72 receiving yards. While it is obvious the Rams have to deal with Kamara in their last game against Carolina, they faced Christian McCaffery, who lit them up for 128 yards on the ground and 81 yards through the air.

The Saints got the win last week, but their defense was not a good one giving up 414 total yards.

Jared Goff had 186 passing yards with one TD and one INT, and he spread the wealth around in the game where he did not have to air out that often.

L.A. looks to keep Todd Gurley healthy, which he was not in the Super Bowl last season, and he still got it done with 97 rushing yards on 14 carries and he was not much of a factor in the pass game. However, he had some help with Malcolm Brown rushing for 53 yards.

The Rams are only 2-5-1 ATS in their last eight home games.

Hard to go against Brees and company with the offense they have, but the Rams are the new cream of the crop in the NFC. They have it all and they will shore up their defense in this home game. L.A. will not let New Orleans get revenge for last season NFC title game loss, as on their turf they will hold their ground winning a close game and covering the spread.