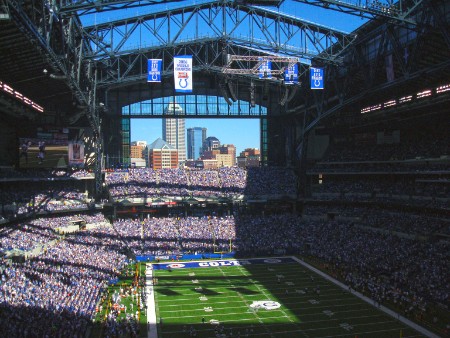 The Colts have won two in a row and they are a 5.5-point favorite hosting the Broncos with a total sitting at 43.

The Broncos had won two in a row before getting trounced in their last game losing to the Kansas City Chiefs 30-6. The team recently traded away 2nd leading receiver Emmanuel Sanders to the San Francisco 49ers and the Broncos keep losing they will likely trade some other players continuing their rebuild.

The Colts have won two straight and four of their last five games and they sit in first place in the AFC South.

The Indy defense has been decent on the season and on offense they rank 10th in the league in rushing yards per game behind what is, arguably, the best offensive line in the league.

Denver has played pretty good defense on the season and they had only given up 13 points before giving up 30 in their last game. The offense has been the main issue, as Denver only ranks 29th in the league putting up an average of only 16 ppg.

The Broncos have had QB problems since Peyton Manning retired and that has continued this season in Joe Flacco’s first season with the team. Flacco has not passed for a TD in his last two games, with 6 TD and 5 INT on the season, and Denver only ranks 26th in the league in passing yards per game. It will be hard to improve that stat now that Sanders is no longer with the team.

In the Broncos last game in the loss to the Chiefs they only had 205 total yards.

Brissett Getting it Done

Jacoby Brissett has played well since taking over for the retired Andrew Luck and on the season only three QB’s have more TD passes. He had a great game in the 30-23 win over the Texans passing for 328 yards with 4 TD and no picks and was only sacked once.

Three players had at least 70 receiving yards in the win over Houston led by Zach Pascal with 106 yards and 2 TD.

After rushing for 132 yards in the previous game Marlon Mack only rushed for 44 yards averaging only 2.4 yards per carry in the win over Houston.

Denver ranks 3rd in the league defending the pass and 16th defending the run. While they gave up 30 points in their last game against the Chiefs, they only gave up 274 total yards, as two of the KC scores came on special teams and defense.

The Broncos have failed to cover in four of their last five games and eight of their last 11 games, overall, while the Colts are 4-1-1 ATS in their last six games.

The Colts are playing with confidence on both sides of the ball and are coming off a big win. On the other side of the coin the Broncos are coming off a bad loss. Brissett and the run game will be solid in this game as will the Indy D and at home the Colts will win their 3rd in a row and cover the spread as well.