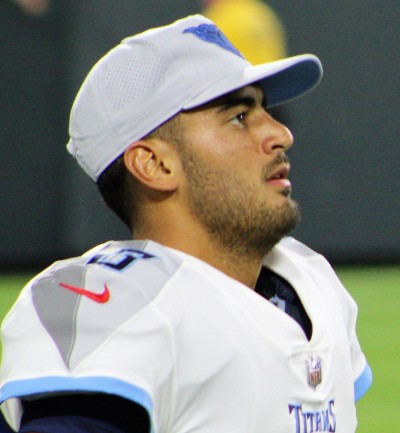 In the Thursday Night NFL matchup in the AFC South the Jacksonville Jaguars host the Tennessee Titans where the visiting Titans are a 1.5 point favorite with a total of 40 at 5 dimes sportsbook.

After scoring 43 points in their season opening win over the Cleveland Browns the Titans, and mainly their offense, fell back down to earth with a 19-17 loss to the Indianapolis Colts in their last game.

The Jaguars did not convert a 2-point conversion with only 36 seconds left in their last game, which they lost to the Houston Texans 13-12 dropping them to 0-2 on the season.

Last season the Titans won both games against the Jags and they covered the spread in each game.

In their home opener in their last game the Titans had the opportunities but could not convert in a 19-17 loss to the Colts. The team got the ball back with over a minute left in the game but could get into field goal range. Marcus Mariota missed on four of his last seven pass attempts and Tennessee did not turn the ball over in the game but forced two turnovers and still lost.

The Titans did play good defense in the game, but their offense did not look good. They did rush for 123 yards, but they only had 119 passing yards with Marcus Mariota being sacked four times and losing 35 yards.

Derrick Henry rushed for 81 yards averaging a solid 5.4 yards per carry and Delanie Walker led Tennessee with only 39 receiving yards. The last time these teams met Henry was huge rushing for 239 yards and look for him to shoulder a big workload in this division matchup.

Mariota has passed for 402 yards with four TD and no INT on the season and he needs the line to protect him better.

Can’t Get the Two

In the Jaguars last game, they lost to the Texans 13-12 where they gambled going for the win with 36 seconds left going for a two-point conversion, but Leonard Fournette could not punch it in.

Jacksonville had 281 total yards in the game and 110 of them came on their two scoring drives in the 4th quarter.

With Nick Foles out at least eight weeks with a broken collarbone rookie Gardner Minshew is under center and in the loss to Houston he was 23/33 for 213 yards with a TD and no INT but he fumbled three times losing one of them. He was also the lead rusher with 57 yards on the ground.

Fournette did not punch it in on the 2-pt conversion and did not have a good game as the featured back rushing for 47 yards and only averaging 3.1 yards per carry.

The Titans have not only covered the spread in their last four games facing the Jags but have won every time.

Tennessee’s lone win this season came on the road and they hit the road to face a Jags team that is only 1-4-1 ATS in their last six home games. While Jax covered the spread last week in the one-point loss to Texas they have failed to cover in their last four games following an ATS win.

Look for the Titans to lean heavily on the run with Henry and play good defense. That got it done in the last game between these division rivals and it will in this game as well. This game will be pretty close, but the Titans will come out on top with a win and cover the spread sending the Jaguars to 0-3.