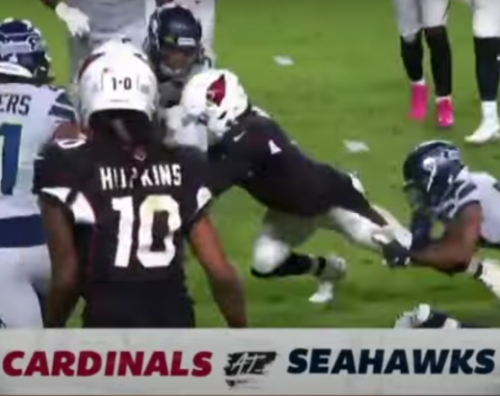 Big Thursday night game in the Great Northwest with first place in the NFC West on the line when the Seattle Seahawks play host to the Arizona Cardinals. The Seahawks are the 3-point home favorite in the game with the total at 58.

The public money has been on the Cardinals in this division game, as they opened as a 5.5-point underdog and as of Tuesday are a 3-point dog.

The Cardinals, Seahawks, and Rams are all at 6-3 in the NFC West with the defending division champion 49ers banged up and sitting at 4-6.

The Cardinals got over their close to Miami by beating a good Buffalo Bills team in their last game-winning on a Hail Mary. Many think that Kyler Murray has jumped into the MVP conversation and if you put his numbers against reigning MVP Lamar Jackson through 10 games they are almost the same.

After a 5-0 start, the Seahawks have lost three of their last four games including their last two. The pass defense has been terrible and the lead RB is injured and their first loss of the season was in the desert against the Cardinals where they gave up 37 points.

Russell Wilson has had to do it all this season, leading the Seahawks in rushing yards, and while Seattle is the highest-scoring team in the league they only scored 16 points in their last game.

Seattle has given up the most yards in the league and their pass defense has been shredded. Their run D has been pretty defense and that unit will be tested in this game by Murray and a rushing offense that ranks first in the league averaging 168.9 rushing yards per game.

In the first meeting between these teams, this season the Cardinals beat the Seahawks 37-34 in OT where Arizona covered as a 3.5-point underdog.

Hopkins is the Man

In the Cardinals’ last game they beat the Buffalo Bills 32-30 where Kyler Murray got away from the defense and let it fly with DeAndre Hopkins beating three Buffalo defenders to catch the game-winning Hail Mary.

The Cardinals racked up 453 yards in the win over Buffalo where they gave up the late lead giving up a TD pass. Murray passed for 245 yards in the win with a TD and a pick and also rushed for 61 yards and two TD.

Kenyon Drake rushed for 100 yards in the win over the Bills and has rushed for triple digits in rushing yards in two of the last three games.

Hopkins ranks second in the league in receiving yards and had 127 of them in the Buffalo game.

While Seattle’s run defense has been pretty good on the season in their last game against the Rams, L.A. ran the ball well and if that happens again Seattle may be staring at a third straight loss.

Wilson Cannot Turn the Ball Over

Turnovers, as well as losses, have been a big reason Wilson may have slid out of the MVP race. He lit it up to begin the season but in the three losses in the last four games he has seven INT. He has four in the last two games and in the 23-16 loss to the Rams in the last game he passed for 248 yards with no TD and two picks.

Not only have turnovers plagued Wilson but he has been sacked 11 times in the last two games.

Chris Carson (323 yards 4.9 yards per carry) has missed the last three games with a foot injury and is listed as questionable for the Cardinals game. Carlos Hyde has rushed for 125 yards this season and missed the Rams game and should be back for Thursday night. Wilson leads the team in rushing yards but needs help in the backfield.

While the Cardinals have won four of their last five games they have given up an average of 32.7 ppg in their last three games.

The Cardinals have failed to cover the spread in their last two games and the Seahawks have not covered in two in a row and four of their last five games.

The Cardinals are the hotter team and I am taking them in this game even on the road. The Seahawks have a bad overall defense and Wilson has been a turnover machine in the last few games. On top of that, the RB corps is banged up so Wilson will likely have to do it all again. Even though I think Arizona will get the W they will at least cover the spread on Thursday night in what I see being a close game.