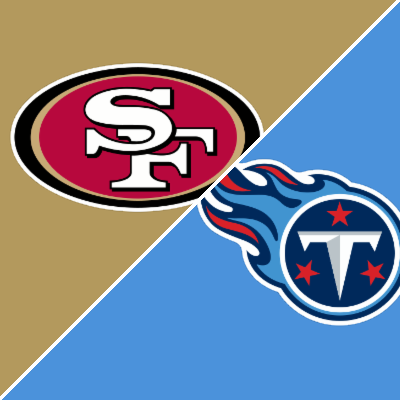 The 49ers have won two in a row and five of their last six games and they were at home in their last game in a 31-13 win over the Atlanta Falcons. San Fran played well on both sides of the ball and with their last win they are now in the sixth spot in the NFC and are in a good position for one of the two conference Wild Cards.

The Titans have lost three of their last four games and in their last game they were on the road and lost to the Pittsburgh Steelers 19-13. Tennessee held the Steelers to only 168 yards but they committed four turnovers and did not force any.

The 49ers have turned things around in the last few games and one of the main reasons has been the offense. The team has scored at least 30 points in four of the last six games and Jimmy Garoppolo is one of the highest rated QBs in the league since Week 9.

Lead rusher Elijah Mitchell is out but other players have been stepping up, such as Jeff Wilson Jr. 249 yards 1 TD), who rushed for 110 yards in the last game.

Deebo Samuel has over 1,000 receiving yards and after three games where he only had 49 receiving yards, he had 60 in the win over the Falcons. He has also helped out in the run game and is now the team’s second leading rusher with 269 yards.

The Titans only rank 22nd in the league in pass defense but second in run defense.

Not Having Henry Not the Big Issue

Ryan Tannehill (3,118 yards 14 TD 14 INT) has struggled and has six INT in the last four games. Lead WR A.J. Brown has been on IR but may come back for the 49ers game. Second leading WR Julio Jones was injured in the last game and is listed as questionable for this one.

RB D’Onta Foreman (348 yards 1 TD) has filled in admirably for Henry with over 100 rushing yards in two of the last three games. He is listed as questionable but should go against San Fran.

The 49ers are hot and the Titans are not. San Fran has turned things around on both sides of the ball, especially on offense where Jimmy G has been more than solid. On the other side of the coin the Titans have run the ball well even without Henry but they are turning the ball over often and making many mistakes. Look for San Francisco to play a complete game and while I do not see them blowout out Tennessee they will win and cover.