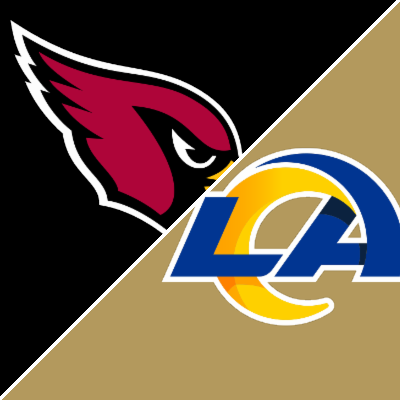 First place in the NFC West is up for grabs when the Cardinals head to La La Land to take on the Rams.

The Rams are a 4.5-point favorite in this division game with the total sitting at 54.5. While L.A. is coming off a more than impressive win over the defending champion Buccaneers the public money has been on Arizona, as they opened as a 6-point underdog and as of Wednesday they are a 4.5-point dog.

The Cardinals were on the road in their last game and beat the Jacksonville Jaguars 31-19. While they racked up over 400 yards, they did not have a great ground game and they outscored the Jags 21-0 after going down 19-10 later in the third quarter.

The Rams are coming off a huge win where they beat the defending champion Tampa Bat Buccaneers 34-24. Matt Stafford played great passing for four TD and while L.A. stuffed the ground game, they gave up 411 passing yards.

Last season the Rams beat the Cardinals in both matchups. L.A. is 7-0-1 ATS in their last eight games facing Arizona.

The Pick-6 Sure Helped

The Cardinals did not look great for most of the game facing the Jags and the momentum swung with only seconds left in the third quarter where they had a pick-6 to take the lead for the first time.

Kyler Murray passed for 316 yards but did not have a TD and was picked off. He ranks fifth in the league in QBR and third in passing yards. A.J., Green and Christian Kirk each had over 100 receiving yards in the win over the Jags.

The ground game has been solid for the Cardinals as well ranking 10th in the league in rushing yards per game. However, they only rushed for 91 yards in the win over Jax averaging a less than stellar three yards per carry.

While the Rams have struggled against the pass on the season they have been great against the run and held the Bucs to only 35 rushing yards.

The Gamble Has Paid Off So Far

The Rams took a gamble trading away Jared Goff and two first round draft picks for Matt Stafford, who has never won a playoff game. However, he has played well so far this season ranking first in the league in QBR and has nine TD and only one pick.

It helps that the Rams have a great WR corps with five players with at least 116 receiving yards. Cooper Kupp leads the NFL with 367 receiving yards and he has two TD in each of his last two games.

While Stafford has been great the Ram’s run game has not. They only rank 27th in the league in rushing yards per game and only rushed for 76 yards.

The Arizona defense has been pretty solid against the run and the pass but they did allow Jax to rush for 159 yards. The L.A. line will have to deal with a good Arizona pass rush led by Chandler Jones, who ranks second in the NFL with five sacks.

This game is a huge one, as the winner will take over sole possession in the tough NFC West. Stafford and Murray have been great and each team has some stars on the defensive side of the ball.

Even though the Rams are more one-dimensional with the run game struggling they have gotten it done as have the Cardinals, who rank tied for first in the league averaging 34.3 ppg. Even with the Rams struggles defending the pass I look for them to pressure Murray often like they did Brady in the last game. Arizona will put up a fight but at home the Rams are the pick to win and cover.