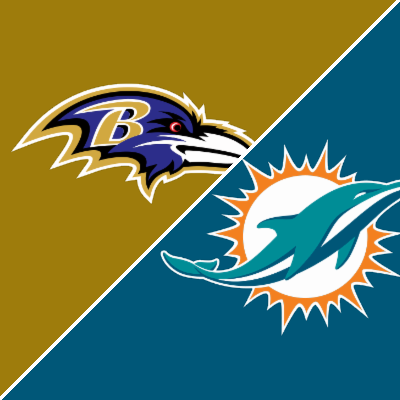 The Ravens are atop the crowded AFC North and Thursday night are in the Sunshine State to face a Dolphins team that snapped their long losing streak in their last game.

The Ravens are a big 7.5-point road favorite in this AFC matchup with the total sitting at 46.5. while the total has gone down a half a point since opening the spread has not changed as of Tuesday.

In their last game the Ravens were at home and had a big comeback to beat the Minnesota Vikings 34-31 in OT. The team was down 24-10 in the beginning of the third quarter but then scored 21 straight points to take the lead before Minnesota forced the extra period with a late score.

The Dolphins were at home in their last game where they snapped their six-game skid with a 17-9 win over the Houston Texans. The win was not an impressive one against the one-win Texans and while the Dolphins forced five turnovers, they committed five.

Every game is a big one for the Ravens, as while they are in first place in the AFC North every team in the division has a winning record.

Another Comeback for Ravens

The Ravens’ comeback against the Vikings was their third n the season where they came back to win after being down double-digits in the second half. The team killed it on the ground with 247 rushing yards and while they committed two turnovers, including one in OT, they outgained Minnesota 500 yards to 318 yards.

Lamar Jackson (2,209 yards 13 TD 7 INT) passed for 256 yards in the win over the Vikings with three TD and two INT and also rushed for 120 yards. He ranks 11th in the league in QBR but what has been impressive is that the QB ranks sixth in the league in rushing yards (600).

Devonta Freeman and Le’Veon Bell combined for 127 rushing yards in the last game and may get most of the reps in this game, as second leading rusher Latavius Murray is listed as questionable and missed the Vikings game.

WR Marquise Brown and TE Mark Andrews each have at least 650 receiving yards and Brown, who had 116 yards last week, is listed as questionable with an injury.

Baltimore ranks first in the NFL in rushing yards per game and Miami ranks 17th in run defense. The Dolphins pass defense ranks third to last in the league but did have three INT in the last game.

The Dolphins had their losing streak snapped in their last game which was not pretty. There were nine turnovers in the game and Miami won despite being outgained (272 yards to 262 yards) and only rushing for 47 yards.

Tua Tagovailoa missed the last game with a finger injury and is listed as questionable but was scheduled to resume throwing this week at practice. If he cannot go Jacoby Brissett will get another start and in the win over Houston, he passed for 244 yards with a TD and two INT.

The Dolphins rank dead last in the league in rushing yards per game. Lead rusher Myles Gaskin (313 yards 1 TD) has only totaled 70 yards in the last two games where he averaged 1.7 and 3 yards per carry respectively.

Baltimore ranks fifth in the league in run defense but second to last in the NFL in pass defense, but can Tua or Brissett take advantage of that?

The Dolphins have major issues on both sides of the ball while the Ravens are gunning for the top seed in the AFC. Look for Jackson to have a big game and for the Ravens’ defense to shut down the less than dynamic Miami offense. This game will not be close, as Baltimore will easily win and cover the spread even in South Beach.