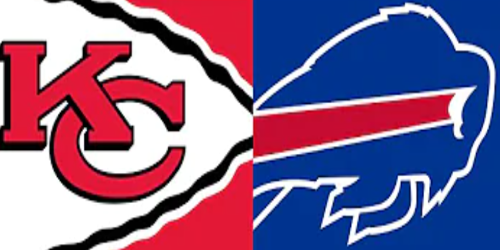 The Bills head to the heartland to take on the Kansas City Chiefs in the AFC title game with one big question looming for KC. The Chiefs are a 3-point favorite with the total sitting at 54.

While the total has gone from 55-54 since opening the spread has not changed as of Wednesday.

The big question in this game is will Patrick Mahomes play? He suffered a concussion in the last playoff game in the 22-17 win over the Cleveland Browns and his availability has been a huge cloud over what should be a great matchup.

The Bills are red-hot riding an 8-game win streak and while Josh Allen and the dynamic Buffalo offense gets most of the press it was the defense that came up big in the last playoff game in a 17-3 win over the Baltimore Ravens.

These teams met in Buffalo in Week 6 with the Chiefs beating the Bills 26-17.

When Mahomes went out in the last game veteran Chad Henne came in and led the Chiefs to the win in their last game. Andy Reid made some gutsy calls with the 13-year QB playing in his first playoff game and will have to make many more if Mahomes cannot go.

Mahomes passed his first test of the concussion protocol process on Tuesday but has a long way to go. Still ESPN pundit Ryan Clark is sure he will go and I would be surprised if he was not cleared.

The Chiefs covered the spread in the Week 6 win over the Bills and have covered in four of their last five games facing them.

One Play Turns the Tide

While the Bills’ strength is Allen and the offense it was the D that came up big in the last game, especially Taron Johnson’s INT for a pick-6 when the Ravens were about to score.

Allen had a pretty good game with 206 yards with a TD and no INT but while he has made many big plays on the season he only averaged 5.6 yards per reception. Stefon Diggs, who led the league in receiving yards this season, had 106 yards and caught the lone TD in the win over Baltimore.

One concern for the Bills was the run game, which was non-existent in the win over the Ravens with a grand total of 32 yards. Devin Singletary only rushed for 25 yards on seven carries and can Buffalo win a one-dimensional game against the Chiefs?

Allen and company will face a KC defense that only allowed 196 yards in the win over the Browns and came up big late with Mahomes out.

In the loss to the Chiefs earlier this season Allen only passed for 122 yards with two TD and a pick and the Bills were outgained 466 yards to 206 yards and gave up 245 rushing yards.

There are things to look at on both sides of the ball for the Chiefs but Mahomes is the main factor. He had a big season and is the main cog in the wheel of the KC offense, which, we all know, has no lack of weapons.

Mahomes went out in the third quarter of the last game and when Chad Henne came in he was 6-8 for 66 yards with no TD and a pick. He had a huge run and fourth and 1 conversion in the win over the Browns but also threw a bad pick that gave Cleveland life.

The Chiefs did rush for 123 yards last week and killed it on the ground in the earlier win over the Bills this season. Darrel Williams rushed for 78 yards averaging six yards per carry in the win over Cleveland. He only has 169 rushing yards on the season and the main RB in ClydeEdwards-Helaire (803 yards 4 TD) has missed the last two games and is questionable for the conference championship game.

Edwards-Helaire had a solid rookie season for KC and his biggest game of the season was facing Buffalo where he rushed for 161 yards.

Again, I think Mahomes will go in this game and am making my pick because of that. The Chiefs have not been killing teams in the second half of the season and that can be shown since in their last eight games they have only covered the spread one time.

However, with their star under center they will get a huge boost the D will come up with some big plays. Allen and the Buffalo offense will keep them in the game but the Chiefs have too much firepower and at home they will win and cover and advance to the Super Bowl, again.