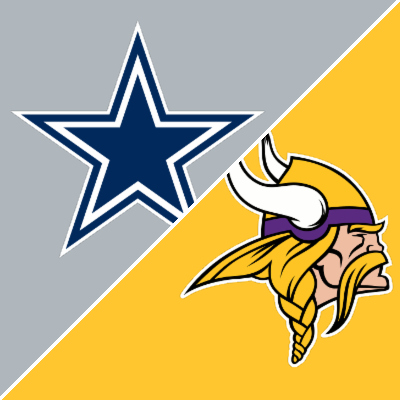 The red-hot Cowboys have won five in a row and they head to the Land of 10,000 Lakes to face a Vikings team that has won two in a row.

Both of these teams are coming off a bye.

In their last game the Cowboys were on the road and pulled off a 35-29 OT win over the New England Patriots. The team had to win in OT despite outgaining the Pats by 232 yards (567-335) and they had the same number of turnovers (2).

The Vikings were on the road in their last game and beat the Carolina Panthers 34-28 in OT. Kind of like the Cowboys game in that in the win over the Panthers, Minnesota outgained them by 265 yards (571-306) and they forced three turnovers and only committed one.

Will Dak Play for Cowboys?

While this is a big Sunday night game many are wondering if Dak Prescott will play. The Cowboys are running away with the NFC East and Prescott has an injured calf and listed as questionable. If he does not go Cooper Rush will see his first action of the season.

The Cowboys have two great duos on offense. WRs CeeDee Lamb and Amari Cooper have combined for 870 receiving yards and each has four TD. Ezekiel Elliot and Tony Pollard are a great 1-2 punch out of the backfield and each is averaging over five yards per carry.

Even if Prescott plays the Cowboys will likely lean on the run and that is not good for the Vikings, who only rank 26th in the league in run defense.

Vikings Could Really Use a Win

Not only could the Vikings use a win to get over .500 and keep pace with the Packers in the NFC North but their upcoming schedule is killer. Not only do they have to face Dallas in a primetime game but their next three games are against the Ravens, Chargers, and Packers with two of them on the road.

Kirk Cousins (1,769 yards 13 TD 2 INT) has played well and limited mistakes but still only ranks 17th in QBR. Still, after one TD and one INT in two straight games he had three TD and no picks in the win over Carolina in the last game.

Dalvin Cook (366 yards 2 TD) got off to a slow start to the season but he has rushed for at least 131 yards in two of his last three games.

While the Dallas run defense has been solid the same cannot be said for a pass defense that ranks 28th in the league.

Not only have the Cowboys won six in a row but they covered in every game. That trend ends Sunday night.

I am not sure Prescott will play but even if he does the Vikings are primed for an upset. They are rested, as are the Cowboys, and Cook has played well in the last few games. The team will run the ball well and Cousins will have a good game. Dallas will also run the ball well but not as well as Minnesota. With or without Prescott the Vikings will show they are a legit playoff contender and they will not only cover the short spread but get the win as well.