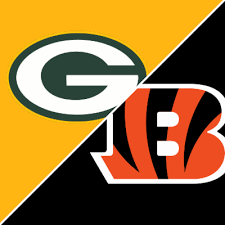 The Packers have won three in a row and head to Cincy to face a 3-1 Bengals’ team that has played a very weak schedule.

Green Bay is a 3-point road favorite in this non-conference affair with a total of 50.5. while the total has gone up a point since opening the spread has not changed as of Wednesday.

The Packers are coming off their third win in row, which was a 27-17 home win over the Pittsburgh Steelers. The team had balanced on the offensive side of the ball, held the Steelers to seven points in the second half, and came through in the clutch converting nine of their 15 third downs.

The Bengals won their second in a row in their last game with a 24-21 home win over the Jacksonville Jaguars. The team is tied with the Cleveland Browns and Baltimore Ravens atop the AFC North and have played good defense ranking seventh in the league giving up an average of 18.8 ppg.

While the underdog has covered the spread in the last four games between these teams they have not met since the 2017 season.

The Old Duo is Back

In the 27-17 win over the Steelers the Packers showed why they brought back WR Aaron Cobb, as he caught two TD. Green Bay had solid balance in the game with 236 passing yards and 131 rushing yards and their defense forced two turnovers.

Aaron Rodgers did not have the best game facing Pittsburgh (20/36 248 yards two TD no INT) but he did rush for a scare and in the last three games he has eight TD and no picks.

While the Bengals have played good D on the season in their last three games they have faced three of the weaker offenses in the league and they lost one of those games.

Things are good in Cincy with the Bengals at 3-1 and this will be their first game facing a legit team. In their first four games they have played team with a combined record of 4-12.

In the win over the Jags in their last game the Bengals scored all 24 of their points in the second half and while they had 420 yards they only rushed for 78 yards.

Cincy does have a solid young WR duo in Ja’Marr Chase (297 yards 4 TD) and Tyler Boyd (259 yards 1 TD) and they may need to come up big in this game, as RB Joe Mixon is questionable with an ankle injury. Mixon ranks third in the NFL with 353 rushing yards and if he cannot go it will be a blg blow., Cincy is thin at the RB position and his backup is Samaje Perine, who only has 28 rushing yards on nine carries this season.

The Packers’ defense has been up and down on the season but they have held their opponents to 17 points in two of the last three games.

The Bengals are a decent team but not a great one like the Packers are. Mixon’s loss could be a big one but even if he plays Cincy will not beat Rodgers and Green Bay. The reigning MVP will have a solid game as will the Packers’ defense and they will roll the Bengals winning their fourth in a row and covering the spread.