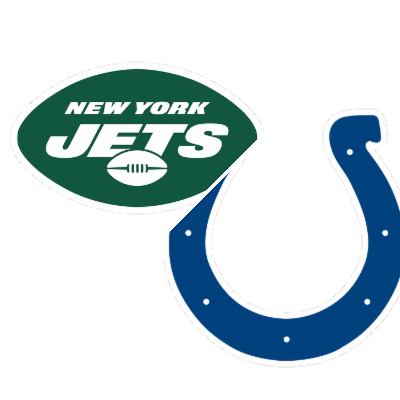 The Jets are coming off a surprising win and on Thursday night head to the Nation’s Heartland to take on a Colts team that is coming off a tough loss.

Oddsmakers have the Colts as a big 10.5-point home favorite in this AFC game with the total sitting at 46.5. while the total has gone down a half a point since opening the spread has not changed, as of Tuesday.

In their last game the Jets doubled-up on their win total with a big 34-31 upset over the Cincinnati Bengals, who came into the game winners of two in a row and tied for first place in the AFC North. What is even more impressive in the win is they put up their highest point total with their backup QB under center.

The Colts were at home in their last game and lost a tough 34-31 overtime game against the Tennessee Titans. Carson Wentz was intercepted in Colts’ territory in overtime giving the Titans a game-winning field goal. The loss was also costly, as it dropped them three games behind the Titans in the AFC South.

Last season these teams met at Indianapolis with the Colts laying a 36-7 beat down on the Jets.

No Starter for Jets, No Problem

In the win over the Bengals, Jets’ starter Zach Wilson was out and Mike White made his first NFL start leading New York to a win. While the Jets committed three turnovers and only forced one, they had nearly 200 more yards of total offense (511-318) and held Cincy to only 42 rushing yards.

White took advantage of the first start of his career passing for 405 yards with three TD and two INT. He was only sacked twice and completed a whopping 82.2% of his passes. Four players for the Jets had at least 67 receiving yards led by RB Michael Carter (95 yards), who also rushed for 77 yards and a TD averaging 5.1 yards per carry.

Carter leads the team with only 279 rushing yards and while he struggled in two games before the last one, he does have at least 67 receiving yards in the last two games.

Corey Davis leads New York with 349 receiving yards but missed the last game and is unlikely to play Thursday. Carter ranks second on the team with 226 receiving yards.

To say the Indy defense is balanced would be an understatement ranking 15th in the league in both run and pass defense.

Not only was Wentz intercepted in OT in the last game but also threw a bad pick-6 in the fourth quarter giving the Titans a 31-24 lead. He passed for 231 yards in the game with three TD and the two picks and was sacked only once. He had gone five games without an INT.

Jonathan Taylor (649 yards 6 TD) ranks second in the NFL in rushing yards and after two games with at least 107 rushing yards he had 70 in the last game with a TD and averaged 4.4 yards per carry.

WR Michael Pittman Jr. (594 yards 4 TD) is the lead target and has 193 receiving yards with three TD over the last two games. Taylor ranks second on the team with 265 receiving yards.

The Jets rank 27th in the league defending the pass and rank 18th defending run but did play great run D in the win over the Bengals.

Indy has only covered in two of their last three home games and I look for that trend to continue. The Jets were more than impressive with White last week and he will get the start on Thursday. Wentz needs to regroup and avoid the picks and I think he will do that in this game. I look for Indy to win but for White and the Jets to keep it close after a great last game and they will cover the double-digit spread.