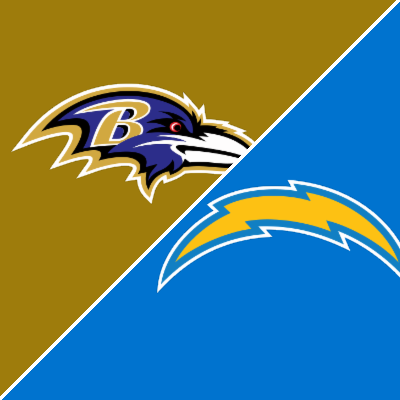 The Chargers are rolling with three straight wins over solid opponents and they head east to take on a hot Ravens team that has won four in a row after dropping the season opener.

The Ravens are a 3-point home favorite in this AFC clash with a total of 52. The total has gone up a half a point since opening but as of Thursday the spread has not changed.

In their last game the Chargers were at home and played a barnburner in a 47-42 win over the Cleveland Browns. Justin Herbert had another big game and the team won despite giving up 531 total yards and committing the game’s only turnover.

The Ravens were at home in their last game and beat the Indianapolis Colts 31-35 in overtime. Lamar Jackson led the team back from a 25-9 deficit in the beginning of the fourth quarter.

In the wild win over the Browns last week Justin Herbert (1,576 yaerds 13 TD 3 INT) led the Chargers to 26 points in the fourth quarter and for the game passed for 398 yards with four TD and was not picked off. He ranks fourth in the NFL in both passing yards and QBR and in his last three games has 11 TD and no picks.

The Ravens have 12 sacks on the season and their pass rush facing a solid Chargers’ offensive line is vital in this big game. They have to pressure Herbert, as their pass defense only ranks 28th in the league while their run defense ranks seventh.

Jackson Does it All, Again

In the win over the Colts on Monday night Jackson carried the offense again leading the team in passing and rushing yards. He lit it up in the air passing for 442 yards with four TD and also rushed for 62 yards.

While Jackson is known as a rushing QB he ranks fifth in the NFL in passing yards and eighth in QBR. He leads the Ravens with 341 yards and the two RB’s of Ty’Son Williams and Latavius Murray have combined for 338 rushing yards.

While Jackson has been legit in the air this season and the Ravens rank sixth in passing yards per game, they still have the ground game ranking fourth in rushing yards per game. That does not bode well for the Chargers, as they have a good pass defense but rank dead last in the league in run defense and gave up 230 rushing yards in the win last week over the Browns.

Herbert will have another big game facing a struggling Baltimore defense but Jackson and the Ravens’ run game will not be stopped. They are facing the league’s worst run defense and they will rack up the yards on the ground. L.A. will keep it close but the Ravens will still get the win at home and cover the spread extending their winning streak to five games.