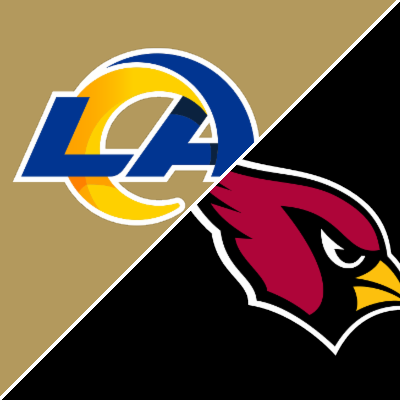 The Rams ended their losing streak in their last game and need a win in the desert against the Cardinals to stay in the NFC West race.

Oddsmakers have the Cardinals as a 2.5-point home favorite in this division matchup with the total sitting at 51.5. Public money has been on the Rams in this game, as they opened as a 3-point underdog and as of Friday are a 2.5-point dog.

In their last game the Rams snapped their three-game skid with a 37-7 blowout win over the Jacksonville Jaguars. L.A. dominated the game from the get-go and racked up 418 yards while only allowing 197 yards and they forced two turnovers.

Arizona was on the road in their last game in the Windy City and beat the Chicago Bears 33-22. Kyler Murray passed for two TD and rushed for two TD as well and the Cardinals forced four turnovers while not committing any.

In Week 4 in La La Land the Cardinals beat the Rams 37-20. The Rams failed to cover in that game but they have covered the spread in their last six road games against the Cardinals.

No better way to end a losing streak than playing the Jaguars, who the Rams manhandled in the blowout win in their last game. L.A. is two games back of the Cardinals in the NFC West and if they lose, they will likely have to take the Wild Card route to make the playoffs.

Matthew Stafford may be out of the MVP race but he has the third most passing yards in the NFL and had three TD and no INT in the last game after five picks in the three-game losing streak.

Cooper Kupp leads the league in receiving yards and had 129 of them in the last game but was injured and is listed as questionable. Still, L.A. has a solid WR corps and Odell Beckham Jr. has a TD in each of his last two games.

The Cardinals rank fourth in the NFL in pass defense and 16th in in run defense.

Get Some Home Cooking

While the 10-2 Cardinals are perfect on the road this season (7-0) they are only 3-2 at home. They can, pretty much, wrap up the NFC West title with a win in this game.

Kyler Murray was legit in the last game with four TD, two in the air and two on the ground, after missing the previous three games with an ankle injury.

James Conner (630 yards 12 TD) is not the main guy with Chase Edmonds on IR and while he has been putting up pretty good yardage numbers, he is only averaging 3.8 yards per carry.

DeAndre Hopkins is also back after missing three games due to injury and he is one of four WRs, who have at least 421 receiving yards.

Murry and company will be facing an L.A. defense that ranks 16th in the NFL against the pass and seventh against the run.

The Rams had failed to cover the spread in five straight games before doing so in the last one.

Ok, so the Cardinals beat the Rams this season and they are at 10-2 but they were not overly impressive in the last game. They did win by 11 points but allowed 22 points to a Bears’ team that has four wins and ranks 30th in the NFL in scoring. I look for Stafford and L.A. to put it all together in this game and avenge their early season loss to the Cardinals. Not only will the Rams cover the short spread in this division game but also get the win.