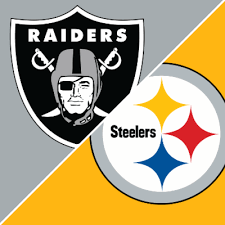 The Raiders and Steelers both had to of the most impressive wins in the first week of the NFL season and face off in an AFC matchup.

The Steelers are a 5.5-point home favorite as of Thursday opening at -6 and the total sits at 48.

The Raiders season opener was at home where they beat the Baltimore Ravens 33-27 in an overtime barnburner. Derek Carr was fantastic and the team looks to win their second game in a row as a betting underdog.

The Steelers won their opener at home 23-16 facing a Buffalo Bills team that many think is a Super Bowl contender. The defense bottled up Josh Allen and looks to do the same facing Carr, who had the most passing yards of any QB in Week 1.

While the Raiders have covered the spread in their last four games facing the Steelers these teams have not met since the 2018 season.

Carr Lights it Up

In the thrilling overtime win over the Ravens David Carr lit it up passing for 435 yards with two TD and one INT and led Las Vegas on a game-tying drive with less than 40 seconds left and no timeouts.

Las Vegas did have trouble rushing the ball against a tough Ravens’ defense. They only rushed for 82 yards with 31 of them coming off a QB scramble from Marcus Mariota. Last season Josh Jacobs rushed for over 1,000 yards but in the season, opener rushed for 34 yards on 10 carries with one of them being 15 yards.

Carr and company will be facing a solid Pittsburgh defense that may have the best front seven in football. They only allowed 16 points in Week 1 to a Buffalo team that as the second highest scoring team in the NFL last season. Carr was sacked three times in the win over Baltimore and this Sunday will face a Pittsburgh pass rush that is led by T.J. Watt, who had two sacks and a forced fumble last week.

In the win over the Bills the Steelers rallied scoring 17 of their 23 points in the fourth quarter. They were outgained 371 yards to 252 yards and were only 4/12 on third down but forced the game’s only turnover and came up big late.

Ben Roethlisberger was 18 for 32 with 188 yards with a TD and no INT and was sacked twice. JuJu Smith-Schuster and Chase Claypool combined for 97 receiving yards.

Last season the Steelers ranked dead last in the NFL in rushing offense. They drafted Najee Harris in the first round but he did not have the best debut in the win over Buffalo rushing for 45 yards and only averaging 2.8 yards per carry. This week he faced a Raiders’ defense that gave up 189 yards against Baltimore, who has led the league in the last two seasons in rushing yards.

The Raiders are 4-1 ATS in their last 5 games as a road underdog and the Steelers are 0-4 ATS in their last 4 games as a favorite. I look for those trends to continue. The Raiders come into this game with confidence after their big win over Baltimore last week. Carr was great and the team came through in the clutch. The Steelers played well last week, especially, on defense but their offense was not great. Their D will play well again but Carr will make some plays. This game will be pretty close and while Las Vegas may not get the win, they will cover the spread.