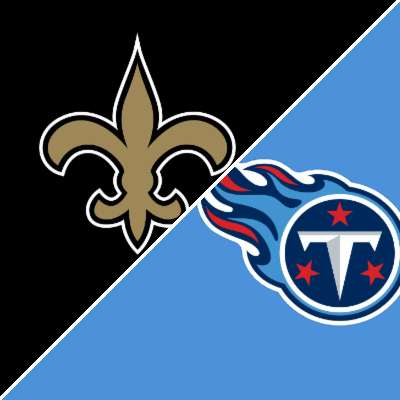 Oddsmakers have the Titans as a 3-point home favorite with a total of 44.5. while the total has gone down a half a point since opening the spread has not changed as of Wednesday.

In their last game the Saints were at home and lost to the Atlanta Falcons 27-25. They had won three in a row before the loss and while they took the lead late, they could not stop the Falcons on n the game winning drive losing on a 29-yard field goal as time expired.

The Titans won their fifth in a row in their last game where they were on the road scoring a big upset in a 28-16 win over the L.A. Rams. Tennessee had a 21-3 halftime lead and their defense, which forced two turnovers, was the star of the game.

These teams met last in the 2019 season and the road team has covered the spread in the last four meetings.

Saints No Answer for Ryan

The Saints were down big in their last game against the Falcons and while they scored 22 points in the fourth quarter they had no answer for Matt Ryan, who passed for 343 yards with two TD and no INT and marched Atlanta down the field with less than a minute remaining to nail the game-winning field goal.

Trevor Siemian passed for 269 yards with two TD and no INT in his first start since taking over for the injured Jameis Winston. He did have a fumble and could not get much going until late in the game. He or Taysom, who was 2/2 for 33 yards in the last game, will get the start against the Titans but a starter for the team has not been announced as of Wednesday.

Kamara has his work cut out for him in this game, as while the Tennessee pass defense has had issues the run defense ranks eighth in the league. You can be sure the Tennessee D will focus on containing Kamara.

In the win over the Rams the Titans picked off two passes within 20 seconds and took one to the house for a pick-6. The defense was vital, as the team was outgained 347 yards to 194 yards and the run game struggled without Henry with only 69 rushing yards.

Ryan Tannehill (2,145 yards 11 TD 8 INT) only passed for 143 yards in the win over the Rams with a TD and an INT. He needs to pick up his play without Henry behind him and in the last four games he has five TD and five INT.

D’Onta Foreman led the Titans with 29 rushing yards in the last game on only five carries while Jeremy McNichols and Adrian Peterson only combined for 45 yards on 17 carries.

The Saints rank first in the NFL in run defense but only 27th in pass defense.

The Titans have covered in their last five games and they will make it six after this game.

Tennessee got a big win without Henry in the last game even though the team failed to gain over 200 total yards. Tannehill was ok and he will be better than ok in this game. He will have to get it done without Henry and some backs that will face New Orleans and their top-ranked run defense. He will play well as will the Tennessee defense and they will win their sixth in a row and cover the spread.