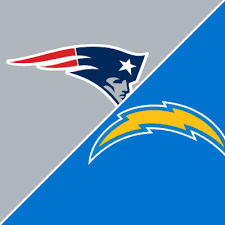 The Patriots are coming off a blowout win and head to L.A. to take on a Chargers team that had a bye week to get over their bad last loss.

The Chargers are a 5-point home favorite in this AFC game with a total of 49. The public has backed the Pats in this game, as they opened as a 6-point underdog and as of Thursday are a 5-point dog.

The Pats were at home in their last game and they laid a 54-13 beat down on the New York Jets. New England has won two of their last three games and while those wins came facing the woeful Jets and Texans their last two losses were a 2-point loss to the Buccaneers and an OT loss to the Cowboys and those teams have combined for only two losses.

The Chargers are coming off a bye week and in their last game they had their three-game win streak snapped with a bad 34-6 road loss to the Baltimore Ravens. Justin Herbert was shut down in that game and he has to bounce back in this game for the bolts to keep pace with the 5-2 Las Vegas Raiders in the AFC West.

These teams met in L.A. last season where the Patriots crushed the Chargers 45-0.

Ok, so it is the Jets but in the Patriots last game, they beat them for the second time this season and in the two games outscored them 79-19.

Jones has a decent WR corps led by Jakobi Meyers (390 yards) and Kendrick Bourne (350 yards) but will he pass much in this game? The Chargers have one of the best pass defenses in the league but they rank dead last in run defense.

Look for Damien Harris to get a lot of work in this game facing the Chargers less than stellar run defense. He has rushed for over 100 yards in each of the last two games where he averaged 7.6 yards per carry and 5.6 yards per carry respectively.

Time to Heal for Chargers

The Chargers were flying high winners of three in a row before their bad loss to the Ravens in their last game. However, they should be fresh and ready to go for the game against the Pats coming off a bye.

Mike Willams and Keenen Allen each have at least 419 receiving yards and Williams has six TD. Austin Ekeler (356 yards 4 TD) had rushed for 183 yards in two games but was stuffed in the Baltimore loss with seven yards on six carries.

The Patriots have looked pretty good in their last four games even going 2-2 in that span. However, the Chargers are a better team and are coming off a bye week. I think the bad loss for them will be good for the team, as many were jumping on their bandwagon. The Patriots will put up a fight but Herbert will rebound and have a solid game and lead the Chargers to a win and they will also cover at home.