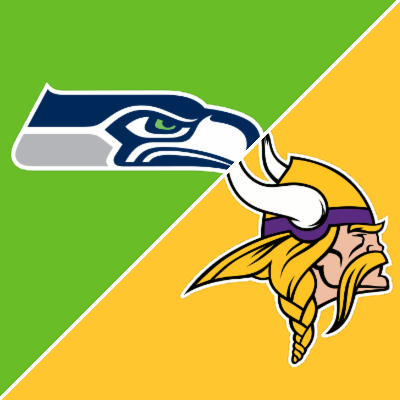 The Vikings have lost two close games to start their season and they are at home for the first time and host a Seahawks’ team that fell apart late in their last game suffering their first loss.

The Seahawks are a slight 1.5-point road favorite in this NFC matchup with the total sitting at 55.5 The public has backed Seattle so far, as they opened as a 1-poiint favorite and as of Wednesday are a 1.5-point favorite.

The Seahawks lost at home to the Tennessee Titans in their last game 33-30 in OT. They were up 30-16 in the first part of the fourth quarter but allowed Tennessee to come back behind a monster day from Derrick Henry, who torched Seattle to the tune of 182 rushing yards and three TD and 55 receiving yards.

In their last game the Vikings lost to the Arizona Cardinals 34-33. Minnesota K Greg Joseph nailed two 52-yard field goals in the game but missed the potential game-winner late from only 37 yards out. The Vikings gave up 474 yards and took the loss even though they forced two turnovers and committed none and rushed for 177 yards.

The Seahawks were killed on the ground in their last game facing Henry, who rushed for over 2,000 yards last season to lead the league. Now they face Dalvin Cook, who ranked second last season in rushing yards and you know that has to be a concern.

The Seattle loss was their first home opening loss in Pete Carroll’s long tenure with the club. The team simply could not stop Henry in the second half and their offense dried up then as well with only six second half points.

Russell Wilson passed for 343 yards and was not picked off but was sacked twice and both of his TDs came in the first half. Tyler Lockett was huge in the game with 178 receiving yards and Freddie Swain had 95 receiving yards.

Wilson did not get much help from the ground game, as Chris Carson led the way with 31 yards on 14 carries and the team only rushed for 77 yards.

Wilson will get a chance to see a suspect Minnesota secondary but his offensive line is suspect as well and the Vikes have eight sacks through two games.

The Vikings are 0-2 where they have lost their games by a combined four points.

In the loss to the Cardinals in their last game Kirk Cousins passed for 244 yards and three TD with no picks and was only sacked once. The team has a solid WR corps and Dalvin Cook rushed for 131 yards averaging six yards per carry but the defense, mainly the pass defense, was not good in Week 2.

Minnesota has given up a lot of big plays despite the fact they have a good pass rush. The secondary has to step up in this game and it will help if Cook has another big game, as it will help keep Wilson off the field.

Seattle has only covered in one of their last seven road games while Minnesota has failed to cover in their last four home games.

Yeah, Wilson is legit but there are a lot of question marks about the Seattle defense. I look for Cousins and Cook to take advantage of that and the Vikes will put up a lot of points. However, so will Seattle, as Wilson will have another big day. This game will be close but taking the Vikings not only to cover getting 1.5 points but taking them to win as well.