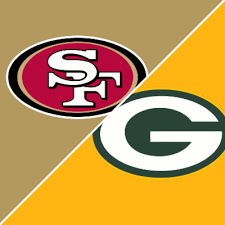 The Green Bay Packers will host the San Francisco 49ers in game two of the divisional playoffs on Saturday night with kickoff set for 815 PM EST. The Packers are 6 point favorites with a current total of 47.

So can the 49ers continue their dark horse run and go into Green Bay and come out with a win? Or more importantly, a cover? Let’s take a look at how our model sees this game.

As you can see, the model likes the 49ers to cover and in one run, using only the most recent data, it’s an outright upset.

We used the following chart in our write up of the cin/ten game and will do the same for the rest of these playoff games.

The significant stat here is the yards per play number. Remember, last weekend every team that had an edge in this stat won and covered their game. The 49ers are #2 of the remaining playoff teams in the yards per play stat. The Bills are #1 with a number of 1.2.

The numbers above certainly suggest the 49ers have a shot. If not to win straight up than certainly to cover.

Can they go into mystical Lambeau field and come away with a win? Well, sure. The Bucs did it last year and in 2019 the Seahawks lost by just 5.

The feeling here is that the Packers are not a dominating force. Nothing like some past Super Bowl teams (in general) where you just knew they were unbeatable in the playoffs. Their defense is mediocre and a look at their 2021 dance card shows lots of close games with some of those against not so good teams.

The Packers beat the 49ers 30-28 back in September. They led 17-0 at one point but the 49ers fought back and took a 28-27 lead with 37 seconds left. Rodgers then drove the Packers down the field and Green Bay won with a FG as time expired.

By the way, the Packers are likely hoping it doesn’t come down to a FG here as kicker Mason Crosby has been extremely shaky in 2021.

So what’s the verdict? Well, keep in mind that in these games, if you can pick the straight up winner you have a good chance of also covering the spread. Every team that won last weekend also covered.

Just the same, we think Green Bay finds a way to win this game but we’re not comfortable laying the price. The 49ers should be a live dog here.

We’re not playing this game but did use the Packers in a small play, a teaser with the Bills.