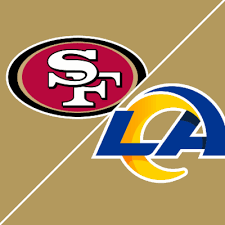 In the season finale the Rams play host to the 49ers in an NFC West clash that has major playoff implications.

The oddsmakers have the Rams as a 4-point home favorite with the total sitting at 44.5. The public has really back San Fran in this division matchup, as they opened as a 5.5-point underdog and as of Wednesday are a 4-point dog.

The 49ers will snag a Wild Card if they beat or tie the Rams or the Saints lose or tie their game with the Falcons. In San Fran’s last game, they won their third in four games with a 23-7 win over the Houston Texans. The defense only allowed 222 yards and Trey Lance threw two TDs.

The Rams are in the playoffs and they will win the NFC West with a win or tie against the 49ers or if the Arizona Cardinals lose or tie facing the Seattle Seahawks. L.A. won their fifth in a row in their last game with a 20-19 road win over the Baltimore Ravens. The Rams turned the ball over three times but forced two turnovers and outscored the Ravens 13-3 in the fourth quarter.

Earlier this season at San Francisco the 49ers laid a 31-10 beat down on the Rams. The 49ers are 4-1 ATS in their last five road games facing the Rams.

Jimmy Garoppolo missed the last game with a right thumb injury and is listed as questionable for the Rams game. While he has played well in the second half of the season, he did throw two picks in his last start.

If Jimmy G cannot go Trey Lance will get another start and in the win over the Texans, he passed for 249 yards with two TD and one INT and also rushed for 31 yards.

The 49ers will look to pound the rock on the ground with Elijah Mitchell (878 yards 5 TD), who had 119 yards in the win over the Texans and has rushed for at least that many yards in two of the last three games.

San Fran will be facing an L.A. defense that ranks a solid sixth against the run but only 20thagainst the pass.

While the Rams have won five in a row Matthew Stafford has been picked off five times in the last two games. On top of that in the bad loss to San Fran earlier this season he had two INT. Stafford did pass for over 300 yards in the win over the Ravens and ranks second in the league in passing yards he has to avoid the pick in this huge game.

Kooper Cup (1,829 yards 15 TD) leads the league in receiving yards, receptions, and TDs caught, and had 91 receiving yards in the last game. He, Van Jefferson, and Odell Beckham Jr. will be a major handful for the 49ers pass defense.

The Rams have run the ball well in their win streak with Sony Michel (802 yards 4 TD) averaging 99.44 rushing yards per game over the last five games.

The 49ers played solid defense in their win over the Rams this season and they rank fifth in the league against the pass and ninth against the run.

While the underdog has covered the spread in the last five games between these division rivals that trend will not continue.

I would love to go with the 49ers being a fan but just can’t do it. The Rams have won five in a row and that is despite the fact that Stafford has been picked off five times in the last two games. He will have a good game and the Rams will lean on the run like they have been doing as of late. I think Lance will get the start for San Fran and while he may play well he will not lead the 49ers to a much-needed win. L.A. will get it done at home and win and cover and wrap up the NFC West title in the process.