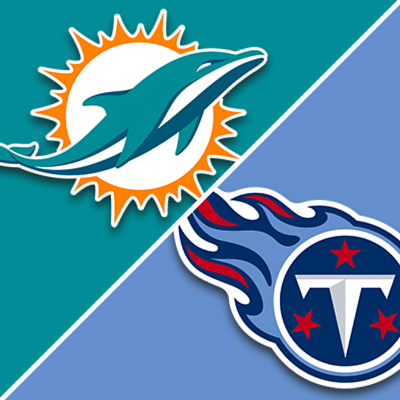 The Titans have won two of their last three games and play host to the Dolphins, who have won seven in a row.

The Titans are a 3.5-point home favorite in this AFC clash with the total sitting at 41. As of Wednesday. the line and the spread have not changed since opening.

The Dolphins won their seventh in a row in their last game with a 20-3 road win over the New Orleans Saints on Monday night. While Miami did not have the best offensive performance with only 259 total yards they held the depleted Saints to 164 yards and forced two turnovers including a pick-6.

The Titans are coming off a big win in their last game where they were at home and beat the San Francisco 49ers 20-17 last Thursday night. While they were outgained by over 100 yards, they forced two turnovers and rallied back from a 10-point halftime deficit.

These teams have not met since the 2018 season. The Dolphins have covered the spread in five of their last seven games facing the Titans.

In the win in the last game for the Dolphins they made history becoming the first team to ever win seven straight games and lose seven straight in a single season.

Tua Tagovailoa has three TD and three INT in the last two games but has played pretty well during the Miami win streak and he ranks a legit ninth in the league in QBR.

Myles Gaskin (590 yards 3 TD) only rushed for 10 yards in the win over the Saints and Duke Johnson had 39 yards after a season-high 110 yards in the previous game.

Jaylen Waddle (941 yards 5 TD) came back in the last game after missing two and caught 10 passes for 92 yards with a TD.

In Miami’s seven-game win streak they only beat one team that currently has a winning record.

On the season the Tennessee defense only ranks 26th in the league against the pass but second against the run.

The Titans have not been the same team since star RB Derrick Henry was injured but they have been holding on and may get Henry back as early as next week.

After not throwing a TD in two games Ryan Tannehill (3.327 yards 15 TD 14 INT) passed for one in the last game and was not picked off.

A.J. Brown had a huge game in the last one against the 49ers with 145 receiving yards and a TD. He could be a big factor again with the second and third leading WRs for the Titans on the COVID-19 list and likely out for the game with the Dolphins.

D’Onta Foreman (365 yards 2 TD) has manned the backfield with Henry out and had rushed for at least 108 yards in two of three games before the last one where he only rushed for 19 yards on 10 carries.

No surprise that the Miami defense has been much better in the second half of the season and, overall, they rank 15th in the league against the pass and seventh against the run.

The Titans are 5-2 ATS in their last seven home games and I look for that trend to continue.

Tennessee has tread water with Henry out and they can win the AFC South with a win or a Colts loss. Tannehill played pretty well in the last game and I look for him to play ok in this one. However, I look for Tua to struggle with the Titans coming after him often. He will make some costly mistakes that the Titans will take advantage of. I look for a pretty close game here but at home Tennessee will make the bigger plays and win and cover.