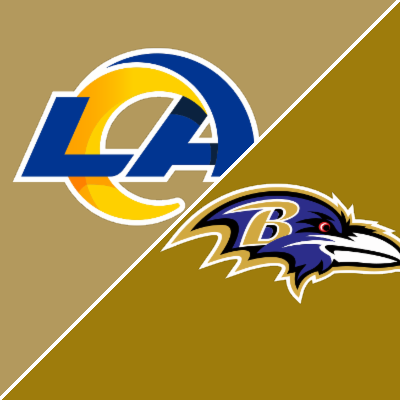 The reeling Ravens play host to the hot Rams, who are in the playoffs and riding a four-game win streak.

The Rams won their fourth in a row in their last game with a 30-23 road win over the Minnesota Vikings. L.A. rushed for 159 yards while holding Minnesota to 66 rushing yards and the Rams won despite Matthew Stafford’s three interceptions.

The Ravens lost their fourth in a row in their last game with a 41-21 road loss to the Cincinnati Bengals. The team was outscored 31-14 in the first half and their pass defense was torched giving up 498 passing yards.

These teams last met in the 2019 season where Baltimore laid a 45-6 win over the Rams. The Ravens are 3-0-1 ATS in their last four meetings facing the Rams.

Can Clinch with a Win and a Little Help

The Rams can clinch the NFC West title with a win over the Ravens and the Cowboys beat the Cardinals, who have lost three in a row.

Stafford has the fourth most passing yards in the league and he only had two picks in four games before three in the last game.

Cooper Kupp leads the NFL in receiving yards and is a legit MVP candidate. Odell Beckham Jr. has not put up big numbers since coming over from the Browns but he has a TD in four of the last five games.

Rams RB Derrell Henderson Jr. is on IR after suffering a knee injury in the last game. Sony Michel now leads the team in rushing yards, has been playing well in the last four games, and in the win over Minnesota rushed for a season high 131 yards. Cam Akers, who has missed all of the season may be back for this game, which would be a big boost.

The Ravens have given up 72 points in their last two games and while they rank first in the NFL in run defense, they rank dead last in pass defense.

Will Jackson Be Back?

Lamar Jackson has missed the last few games due to an ankle injury and is still listed as questionable. He will try to try to practice this week and the team could use their starting QB and lead rusher back. Backup Tyler Huntley is on the COVID-19 list and Josh Johnson, who passed for 304 yards with two TD and one INT in the loss to the Bengals may get the start against the Rams.

Devonta Freeman has only rushed for 39 yards in the last two games and Latavius Murray only had 12 rushing yards in the loss to Cincy.

The Rams’ defense ranks sixth in the league against the run but only 22nd against the pass.

The Rams have not only won four in a row but covered in all of those wins and look for that to continue. L.A. won a big one in their last game even though Stafford struggled. Look for him to get back on track facing a decimated Baltimore secondary that was lit up last week and ranks dead last in the league in pass defense. Jackson’s status is still uncertain but even if he players he cannot do anything to help the pass defense. Stafford will have a big game and the Rams will stay hot winning their fifth in a row and covering the spread.