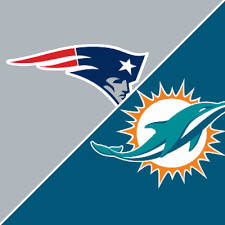 The Dolphins are out of the playoffs but can spoil the Patriots chances at winning the AFC East with a home win.

The Pats can win the AFC East if they win this game and the Bills lose at home to the Jets. If the Pats win and the Bills, Chiefs, and Titans all lose they will be the #1 seed in the playoffs and get a bye but that is an unlikely scenario.

New England snapped their two-game skid with a 50-10 home thrashing of the Jacksonville Jaguars.

The Dolphins had their seven-game win streak snapped in their last game where they were lit up losing on the road to the Tennessee Titans 34-3. Miami as shut out in the second half, gave up nearly 200 rushing yards, and committed two turnovers while forcing none.

In the first game of the season in New England the Dolphins beat the Pats 17-16. The Pats are only 2-7 ATS in their last nine road games facing the fins.

Defense Gets Back on Track

While it was facing the woeful Jaguars the Patriots defense only gave up 10 points in the blowout win while they had given up 60 points in losing their previous two games.

Damien Harris (892 yards 14 TD) was forced out of the Jax game with an injury after rushing for over 100 yards in his previous two games. He is listed as questionable but should go in this game, recently stating “I’m good.”

Miami ranks a legit 14th in the league defending the pass and 10th defending the run but their run D was torched in the last game and you can be sure they will see a lot of New England runs in this game.

Tua Gets Another Shot

Tua Tagovailoa (2.544 yards 15 TD 10 INT) gets another shot to show he will be the Miami QB for 2023 but the verdict is still out. He does nopt have many playmakers around him but he also has made a lot of mistakes like in the last game where he was picked and fumbled three times losing one.

Jaylen Waddle is the biggest talent on the outside but he only had 47 yards in the loss to the Titans after at least 90 in his previous two games. Mike Gesicki (758 yards 2 TD) is a good tight end but does not have over 51 receiving yards in the last five games.

Myles Gaskin leads the Dolphins with 613 yards but only has 33 rushing yards in the last two games.

Tua and company have their work cut out against the Pats and their top-ranked defense that ranks fourth in the league against the pass but only 22nd against the run.

While the Pats have not had much success ATS in the last several seasons in South Beach they are 4-1 ATS in their last five road games and that trend will continue.

While the Dolphins have nothing to lose and will play lose and free they will not be able to move the ball much on the Pats. On top of that the New England run game will get it done and Jones will play a solid game. Miami will put up a fight in the finale but the Pats will be too much on both sides of the ball and they will win and cover.