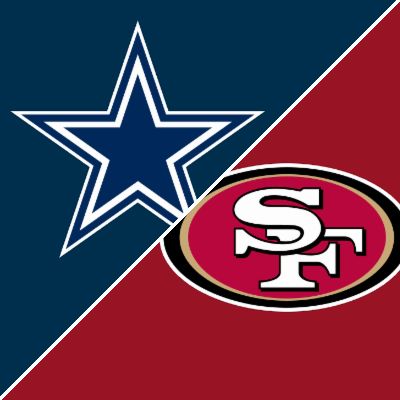 The San Francisco 49ers will host the Dallas Cowboys in the NFC divisional round of the playoffs on Sunday evening in a game that kicks off at 6:30 PM EST. Currently the 49ers are favored by -4 with a total of 46.5.

The NFL definitely saved the best for last this weekend with these Sunday games. It’s a toss up as to which is the better of the two Sunday games but both are certainly highly anticipated.

In taking a glance at the results of the 2022 season for both of these fine teams one thing really jumps off the page. That would be the fact that the NFL is incredibly mediocre. You’d be hard pressed to find solid wins for either team. What you see instead are a bunch of wins over .500 teams or worse with very few exceptions.

For instance, the 49ers lost to the best team they played, the Chiefs, by 21 points. Otherwise they have 3 wins over Seattle and a win over the LA Chargers as their best wins.

The same can be said for the Cowboys though there’s no denying they have more quality wins. They beat the Bengals back in week 2, the Giants twice and the Eagles once.

We mentioned in our write up last week for the Bucs/Cowboys game that the 1st step towards keeping the franchise from becoming the biggest joke in professional sports was beating the Bucs. We liked the Cowboys last week. The feeling was they played their worst game of the year the week prior and were sure to bounce back. Bounce back they did.

But you don’t get credit for winning a wild card playoff game against a bad team. You get credit by stringing together two playoff wins in a row, one against the best the NFL has to offer. Things start to get real for the Cowboys this week in San Francisco.

Cowboys fans will defend Dak Prescott till the cows come home. But the fact remains that the guy is yet to win when it counts in the NFL. Like it or not, NFL QB’s will forever be judged by playoff wins and championships.

After last week, Dak now has 2 wins, both in the wild card round and one of those wins, last week, against a bad team with a losing record that hardly qualifies as a playoff win.

It’s not just Prescott. The franchise in general can’t win a big game. Not since 1995. With all of the talk, all of pomp and circumstance the fact remains that this franchise has been a major league dud for 27 years.

So here we go. Again. The Cowboys and Dak Prescott can take another step on Sunday towards relevancy by beating a solid team on the road and advancing to the NFC Championship game where they’d have a very good chance of winning. Or, they can return to the land of mediocrity where they have resided for almost 3 decades.

Can They Do It?

We think so. We’ll spare you from having to read about our model’s predictions or how one method or another favors one side. We’ll summarize instead.

All of the data suggests these are two good football teams. The 49ers come out on top in just about every method we use to get a number on a game. In most cases it’s not by much. Though one model run of ours does have the 49ers by two TD’s.

Look no further than the 49ers 37-34 win over the Raiders very recently to suggest the Cowboys have a heck of a shot here. Or the Chiefs scoring 44 on the Niners back in October.

There are quite a few teams with very little offensive punch on the list of 49ers victims this year. But the Cowboys offense is legit. They can move the ball and they have a defense to compliment that offense.

Prescott vs. Purdy. It should go to Prescott based on experience alone. We mentioned last week how a wild card game against the Seahawks wouldn’t be too big of a moment for the rookie QB. However we are now entering the territory where that becomes a very real possibility.

We love this 49ers team and they talent they have. In fact, from a football fan standpoint, we’ll be rooting for them. Never liked the Cowboys! But we think Dallas pulls this one out in what is a monumental game in their franchise history.