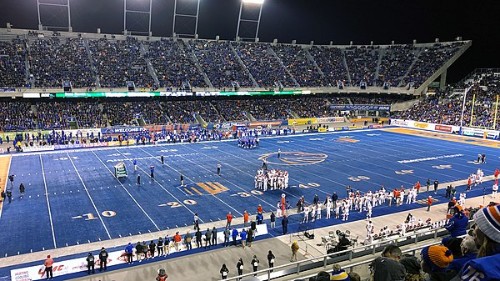 Boise State begins its quest to return to the MWC title game with a viable opponent in Air Force. These teams battled in a shootout last year and it wouldn’t be surprising if a lot of points were scored again. For the Friday night game, the Broncos opened as -8 point favorites.

Boise won this meeting 48-38 last year behind 399 yards and five touchdowns from quarterback Bretty Rypien. They did whatever they wanted offensively, but still allowed Air Force to churn out yards, averaging 3.9 yards per carry en route to 201 rushing yards. With two new quarterbacks leading two undefeated teams, the advantage goes to the home team.

Bachmeier Off to Nice Start

Hank Bachmeier doesn’t have the experience of Rypien, but he’s still had a nice start to the season, averaging 8.4 yards per attempt. His issue has been turnovers, already with three picks and 10 sacks taken. As long as he plays safe, Bachmeier should be in for another good game with wideouts Khalil Shakir, CT Thomas and John Hightower.

The running game has also been efficient for the Broncos as both George Holani and Robert Mahone are averaging more than five yards per carry. Air Force could be better defensively than last year, but it’s still unknown at what level since its toughest opponent has been Colorado.

For the Falcons to pull off the upset, they may need another solid performance from quarterback Donald Hammond, who threw for 155 yards against the Buffaloes. In last year’s loss, the Falcons threw for 242 yards and that was the main reason the game was at least competitive.

If Boise’s defense can step up and not give up the big passing plays to Hammond, it’ll be tough for Air Force to get the cover. Boise is familiar with the triple option and as seen last year, has the tools to limit its effectiveness.

If that happens again, it’s hard to see how Air Force can knock off Boise on the road and under the lights. The Falcons have had success running the ball between Kadin Remsberg and Taven Birdow, but they haven’t seen a defense quite like this one yet.

This isn’t an elite Boise defense, but it did enough in the win against Florida State and held down Marshall after that. Early in this series, Air Force was covering every game because Boise wasn’t familiar with the triple option and the spread was usually in the double-digits. Those days are gone and it also helps the Broncos that this spread is a tad lower at eight points, second lowest in seven games.

The over is 6-1 in Air Force’s last seven games on field turf and 4-0 in the last four meetings between these teams played at Boise. Air Force is 5-1-1 ATS in this matchup, but the push and Boise cover came in the last two games.

Our Pick – It’s early in the week and this is a game we’ll have to take a closer look at before game time, as we like this Air Force squad. For now though, we’ll side with our model, which likes Boise to win by more than 8.