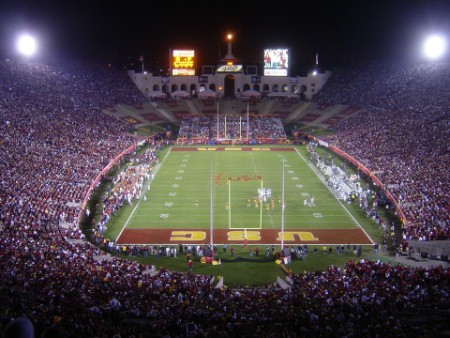 USC hosts Utah on Friday night in college football betting action as 5 point underdogs as of Monday, like to rise even further over the course of the week.

USC wasn’t supposed to lose to BYU, at least for the sake of Clay Helton’s job security. The Trojans opened the year with two solid wins, but following the loss to BYU, have to play Utah, Washington and Notre Dame in the next three games.

The difference between these teams was seen in the results against BYU, which both had to travel for. Utah controlled its game against BYU by using a dominant ground game en route to 5.5 yards per carry and a defense, which didn’t give away any big plays in a 30-12 win.

USC kept BYU around the entire way and that eventually led to a 30-27 overtime loss. The Trojans managed 3.8 yards per carry and quarterback Kedon Slovis threw three interceptions. Even though USC’s defense played well, it wasn’t enough due to the turnovers.

The Utes will take that same run-first approach because that’s what they do. They won last year’s matchup with 200 rushing yards, as well as a superior defense, which didn’t let the Trojans do anything.

In the 41-28 Utah win, USC threw for 132 yards and ran for 73 more. Not great. Unfortunately for the Trojans, similar issues could be ahead because Slovis may be a downgrade at quarterback and as seen last game, could have an interception problem.

If the ground game doesn’t work against this Utah front, it will be up to Slovis to do everything and that’s a hard thing to bet on. Vavae Malepeai and Stephen Carr form a nice one-two duo at running back, but the offensive line is still a question.

The other problem is that the Utes still have their guys from a year ago, namely quarterback Tyler Huntley, who is completing 77.8% of his passes to go with no interceptions.

In addition to him being a mobile threat, running back Zack Moss continues to run over the opposition already with 373 rushing yards and four touchdowns on 6.5 yards per carry. Those two pieces were the main ones Utah needed to win last year’s game and while this game is in Los Angeles, that may not matter.

As seen against BYU, it’ll be hard to bet on USC’s freshman quarterback against better competition. Utah has a better defense than BYU and that’s not good news for the Trojans, who will have to consistently move the ball in order to keep Huntley and Moss off the field.

USC won its first couple games, but its flaws were shown against BYU and Utah will look to exploit those. The Trojans have failed to cover in their last six Friday games. In this meeting, the over has hit in the last four and the home team is 7-1 ATS in the last eight, though the Utes are 4-1 ATS in the last five.

Our Pick – Despite the edges the Utes appear to have, our model doesn’t have them winning by a larger margin. In fact, One model has the Utes by 4 while another has a 1 point Utah win.

As this is being written on Monday afternoon, Utah has just been hit hard AT -3.5 with an across the board move. Some 5’s are now available with +6 not out of the question at some point so watch the board.

Update – this line came back down to early as USC money as poured in. We like Utah -3.5 or better here.