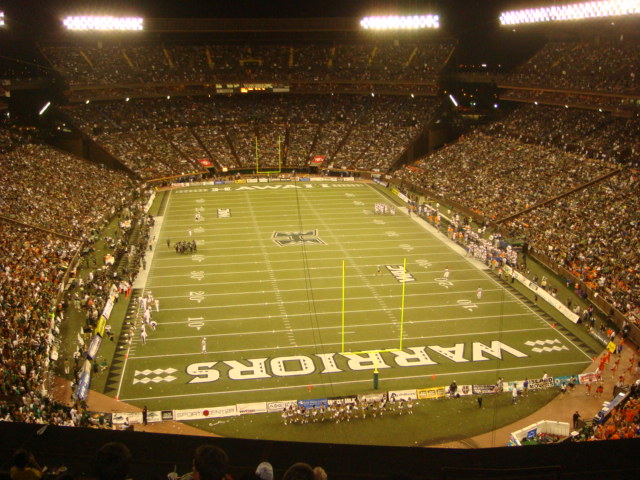 $60 in actual member picks FREE from Docs Sports! - Complete with a PROFIT GUARANTEE! Click Here
The Hawaii Warriors (4-1) host the Air Force Falcons (4-2) at 11 p.m. ET on Saturday night in the final college football game of the week. Air Force opened as 2-½ point favorites and the line has moved to 3 at a couple of sportsbooks.
The Falcons are taking 66% of the betting action as well. Both teams are 3-3 against the spread. The Mountain West rivals last met in 2016 in a game won 34-27 by the Warriors.

The Falcons were last seen smashing Fresno State 43-24. The Bulldogs aren’t exactly stumblebums, so that was a very nice win.

It could be why bettors have tabbed them the favorite even though they are the road team. After all, Air Force already proved they can win in a hostile environment against a good team when they beat Colorado 30-23 in their second game of the season.

Air Force relies on a strong running game which is typical for them. They rank 2nd in the FBS in rushing yards at 296.5 yards per game. The Falcons are racking up a very respectable 34.3 PPG.

The rushing attack is made even deadlier by the fact that the defense is playing so well. It was an INT returned 24 yards for a TD by ILB Kyle Johnson that put the game on ice last week. Overall, this team ranks 21st in total defense at 310.5 yards per game.

This is a big game for Air Force and their margin for error is zero. If they want to win the Mountain division of the Mountain West they have to win out and hope somebody can knock Boise State off not once, but twice. That’s a tall order, but if the dial is moved to three then they can basically forget about it.

Hawaii bringing it on offense

The Warriors are the 22nd best NCAA team in terms of total offense with 473.5 yards per game. That is thanks in large part to a high flying passing attack which ranks 4th overall. QB Cole McDonald has thrown 20 TD passes to this point in the season which is fourth best among all QBs in the FBS.

The key for Hawaii could be getting in front early and forcing Air Force to abandon the run. That means McDonald can’t afford to make mistakes. If they keep from turning the ball over they should be in with a chance to win until the clock ticks down to zero in the fourth quarter.

Hawaii is 3-0 at home with wins over Arizona, Oregon State and Central Arkansas. They still have hope for a respectable bowl game and a top finish in the Mountain West conference West division.

The Warriors are playing with lots of confidence and offensive miscues are the only thing that can derail them. They’re playing a team, Air Force, that forces its opponents to make mistakes. But when the immovable object meets the unstoppable force one of them will have to give. Hawaii at least has the advantage of being the home team.