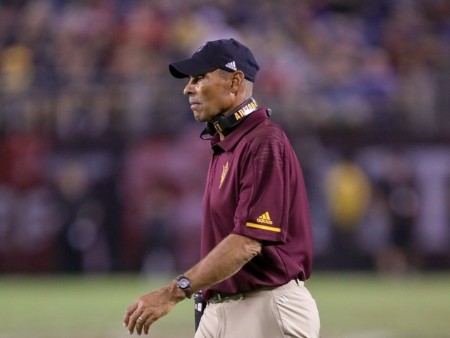 Arizona State is ranked but there still isn’t much known about either one of these teams. The Sun Devils managed to escape after scoring 10 past last week, while the Buffaloes lost in overtime to Air Force.

Playing at home, the Sun Devils were a -7.5 point favorite with an over/under of 49.5 in the middle of the week.

The home team has won the last four meetings between these teams with last year’s 28-21 win for Colorado being similar to this year’s spread. In that win, the Buffs used a balanced attack to get the win.

ASU moved the ball just as well, but oddly Manny Wilkins only attempted 18 passes. This matchup could be even more defensive than that contest because the Sun Devils don’t know where they’re at with their offense.

They’ve scored 59 points through three games and while Colorado’s defense isn’t the best, scoring more than 30 points is unlikely for the favorite. That said, teams have been able to do whatever they’ve wanted against the Buffs, whether that was Nebraska having all day to pass or Air Force using the triple option.

ASU’s freshman quarterback Jayden Daniels has solid numbers, averaging 9.5 yards per attempt and doesn’t have an interception, but he hasn’t been asked to do much and a lot of his numbers are from three long passes.

Running back Eno Benjamin is the best player in the offense and will be the focus in this game. He’s averaging just 3.7 yards per carry, but a matchup with Colorado’s defense could help.

On the other end, Arizona State is allowing plenty of yards, but has given up just seven points every game. The bend, but don’t break approach has worked early and it wouldn’t be surprising if it did again.

There are still reasons to take the Buffs as a road dog with experienced Steven Montez at quarterback. He and top wideout Laviska Shenault aren’t having a huge season numbers wise, but they still have to be accounted for after Shenault finished with 13 catches, 127 yards and two touchdowns in last year’s matchup.

If that combo repeats that performance, this game will finish within seven points. The problem for the Buffs is that they are also struggling to run the ball between Alex Fontenot and Jaren Mangham as the team is averaging 4.0 yards per carry. If they can put together some drives, that would keep their defense off the field, which is what they have to do to win.

Colorado doesn’t have a great defense, but it has experience on offense to stay competitive. The Buffs have failed to cover in their last five conference games and the under is 4-0 in ASU’s last four overall.

Our Pick – Our model suggests this one stays under the posted total of 50.5