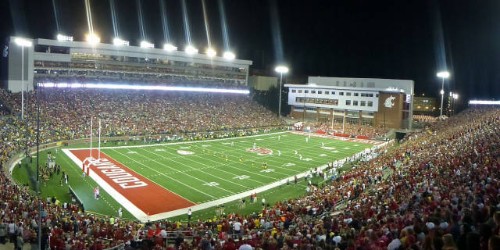 Washington State is still undefeated, but it has a long way to go and barely beating Houston wasn’t a good sign for things to come in the Pac-12. Fortunately, it likely doesn’t have to worry about this game with the Cougars an early -18.5 point favorite with an over/under of 57.

Washington State could still win the Pac-12, but its flaws were shown against Houston, failing to run the ball while its defense allowed 239 rushing yards. That’s the best way to beat the Cougars and the blueprint is there for the Bruins, though they probably aren’t the team that will do it.

The Cougars should have plenty of success in this game with the Air Raid because UCLA hasn’t had many positives from its three losses. Quarterback Anthony Gordon already has 1,324 passing yards on 78.7% completion for 12 touchdowns.

Max Borghi has run for 7.8 yards per carry, but that number will likely drop in conference play and that starts with UCLA. That said, Gordon and company should be enough to get the win with his slew of receivers in Brandon Arconado, Easop Winston and Dezmon Patmon, among others.

It wouldn’t be surprising if UCLA failed to reach double-digits because its offense hasn’t improved much in three games. Quarterback Dorian Thompson-Robinson remains the starter despite completing 54.0% of his passes for five touchdowns and four interceptions.

The running game has also been subpar even with the return of Joshua Kelley, who is averaging 3.2 yards per carry. Top tight end Theo Howard returned last game, but he didn’t change much for the passing game.

The Bruins will likely lean on Kelley as much as possible and hope that works, similar to Houston last week. If the running game works, that’ll keep Wazzu’s offense off the field.

Washington State could look ahead to the trip to Utah next week. A loss there and the Pac-12 title game will be that much further away. So while Wazzu looks like the easy team to bet, it’s never as easy as it seems.

Our Pick – We simply have no interest in backing UCLA at this point. So we’ll lean towards laying the big spot with the Cougars.