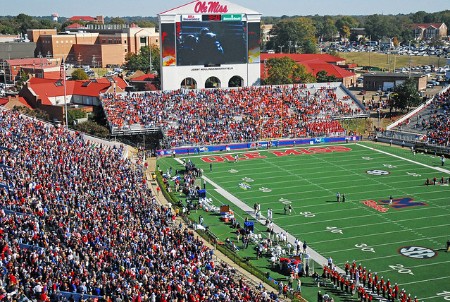 In the first SEC game for both teams Ole Miss plays host to Arkansas as a 6.5-point favorite with a total of 52.

Arkansas won their opening game of the season, but it was far from a great win beating Portland State. The Razorbacks only won two games last season and look to reach that win total in this SEC opener for both teams.

Ole Miss lost their season opener in an upset losing to Memphis 16-10 where they were stagnant on offense with only 173 total yards.

Arkansas has not only covered the spread in their last six games facing Ole Miss, but they have covered in five of their last seven road games against them.

The Rebels were 5-7 last season and they have failed to cover the spread in five of their last six games.

Arkansas beat Portland State 20-13 in their season opener, but it should have not been that close. They forced three turnovers and only had one and they out gained the Pilots 395 yards to 230 yards.

The Razorbacks were led by a ground game that ranked up over 200 rushing yards and Rakeem Boyd led the team with 114 yards on the ground and also had a TD.

Ben Hicks and Nick Starkel split time under center with Hicks leading the way, but the QB play was not very good in the game. Hicks will likely get most of the playing time in this game, as Starkel only played two series with the first ending in an Int and the 2nd ending at the end of the first half when the Razorbacks were on the verge of scoring.

While the Arkansas offense was far from impressive in the win over Portland State, they played good defense. They held the Pilots to 75 passing yards and while they did give up 165 passing yards, they had three INT.

In the 16-10 road loss to Memphis in their season opener Ole Miss had one of the worst offensive performances in a long time. 173 total yards? Yeah, that is not going to cut it no matter who you play.

QB Matt Corral was 9/19 for only 93 yards with no TD and he was picked off and RB Scottie Phillips led the team with 62 yards and averaged a less than impressive 3.3 yards per carry.

Needless to say the Rebels have to find some kind of offensive rhythm game, which they sorely lacked in the loss to Memphis.

Ole Miss did not play bad pass defense in the loss to Memphis but gave up 192 rushing yards and look for Arkansas to pound it on the ground in this game.

Hard pick in this one with each team less than impressive last week. However, Ole Miss is at home and that will help them turn things around facing a less than imposing Arkansas team. They will get the win at home with a good game on both sides of of the football and they will win and cover being the first time they hve covered the spread n their last six times facing Arkansas.