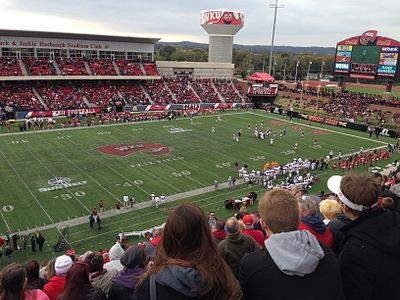 The Army Black Knights (3-2) are traveling to play the Western Kentucky Hilltoppers (3-2) at 7 p.m. ET on Saturday at L. T. Smith Stadium in Bowling Green, Kentucky. The spread opened with Army as four point favorites and hasn’t budged.

The public is backing the Black Knights to the tune of 65% of all wagers. The total is 42 ½ points with early action favoring the UNDER.

Dual threat Army QB Kelvin Hopkins Jr. is the backbone of a run-centric offense for Army. Things can get scary if he’s forced to pass though. He managed to throw an INT against Michigan despite making just four passing attempts in the game. Forced to play from behind against Tulane, he completed a dreadful 9 of 24 passes for 170 yards, 1 TD and 1 INT.

Where he really shines is running the football. Against Tulane he had 24 attempts for 132 yards and 2 TDs. As is typical for Army teams, Hopkins and company will rely on short to medium sized gains, long drives and a slow tempo.

They could have their work cut out for them against the Hilltoppers who rank 22nd in total defense thus far in 2019, allowing 303 yards per game. That ranking should be taken with a grain of salt, however, as they have yet to play any explosive offensive teams.

Western Kentucky will rely on defense

An old saying states that there are lies, damn lies and statistics. The 22nd ranked total defense of Western Kentucky showed chinks in the armor against Louisville, who dropped 38 points on them, but has otherwise been very solid.

They rank 31st against the run at 109.8 yards per game and will present a strong challenge to Army and their wishbone offense.

They enter this game off a gem of a performance against Old Dominion, who they held to 3 points and just 55 yards on the ground. The week prior to that they held UAB to 33 yards on 29 rushing attempts.

You wouldn’t know it based on the 42 points they allowed against Tulane last week, but Army ranks 37th in total defense, allowing 335 yards per game. They are strong against the passing game, ranking 25th in the FBS, but are much weaker against the run where they check in at 63rd overall.

Perhaps their best effort of the year was on the road against Michigan. They held the Wolverines to just 14 points through three quarters before losing the game 24-21 in 2OT. Michigan was able to do very little on the ground, rushing a whopping 45 times for just 108 total yards.

While both of these teams register as above average on defense, they are both well below average on the offensive side of the ball. Army is tied for 65th at 30.2 PPG and Western Kentucky is an abysmal 107th overall at just 21.8 PPG.

We could be looking at a game where time rapidly ticks off the clock and very few points are scored.

Our Picks – Western Kentucky +5 and UNDER 43