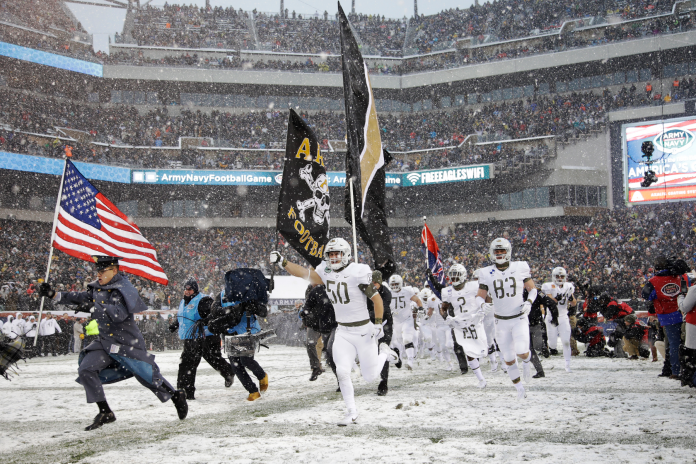 Army took over the rivalry the last three years, but things could revert back to Navy this season. The Midshipmen have rebounded with a 9-2 record and would’ve been in the AAC title game if not for an early loss to Memphis. The Mids opened as -10.5 point favorites for the game at Lincoln Financial Field in Philadelphia.

No matter how good one of these teams is, this matchup always seems to be close. Seven of the last eight matchups have been decided by one score and it wouldn’t be surprising if that happens again no matter what the numbers say.

Navy has used a revived offense en route to its nine wins, while Army has fallen apart on both sides of the ball since almost beating Michigan in the second game of the season.

Navy controlled both sides of the ball when it beat Air Force 35-24 and that could be the case in this game. Army simply couldn’t do anything against Air Force as it gave up 328 rushing yards and while it lost 17-13, its lone touchdown came via an 87-yard pass.

The Mids have the edge on both lines of scrimmage as they’re allowing 3.4 yards per carry compared to 4.2 for the Black Knights. All signs point to success for Malcolm Perry, who has rushed for 1,500 yards and 19 touchdowns on 6.3 yards per carry.

He’s also averaging 13.0 yards per pass on 79 attempts. As a team, there are a lot of guys who will touch the ball, but Jamale Carothers has separated himself the last couple games and is averaging 8.4 yards per carry. Considering Army couldn’t handle Air Force’s triple-option, it’s hard to see them stopping Navy’s.

There could be similar problems on the other side of the ball because Navy’s defense is also just as good as Air Force’s.

Regular starter Kelvin Hopkins seems to pick up an injury every game, so it wouldn’t be surprising if Christian Anderson got some run again after rushing for more than 100 yards last game against Hawai’i. Either way, tail backs Connor Slomka and Sandon McCoy will split most of the other carries for an offense averaging 5.4 yards per carry.

Navy has not only been the better team this season, but it also has revenge on its mind having lost the last three meetings. Of course, sometimes numbers don’t mean anything between these teams and the score tends to be close no matter what the teams have looked like throughout the season.