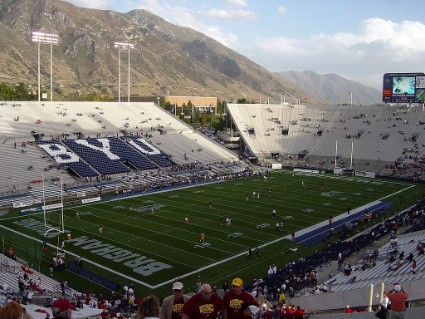 USC comes into this road game as a 4-point betting favorite and that is no surprise after they dismantled a ranked Stanford team in their last game. The total for this non-conference game sits at 55.5.

BYU is also coming off a win and you would think it would be a great one beating Tennessee on the road in OT. However, they needed a miracle play to get the game-tying field goal and were facing a Volunteers team that lost their previous game to Georgia State at home.

USC has only covered the spread in one of their last nine non-conference games while BYU has covered in six of their last seven games overall.

Not many gave USC a chance in their 45-20 win over Stanford last week mainly because in their first game of the season they lost their starting QB in JT Daniels to a season-ending knee injury. However, true freshman Kedon Slovis stepped in and was legit passing for 377 yards with 3 TD and he was not picked off.

The Trojans had 492 yards of offense in the win over Stanford and three WR’s had at least 82 yards with Tyler Vaughns (106 yards 1 TD) leading the way.

USC rushed for 115 yards in the Stanford game, but the ground game was not great and Vavae Malepeai was the team’s leading rusher with only 42 yards averaging only 3.5 yards per carry. However, USC may lean on the ground game in this one since BYU gave up 242 rushing yards in their win over Tennessee.

USC has a good pass rush and that will be key in this game facing a BYU offensive line that did not play well in the Tennessee game.

In BYU’s OT win over Tennessee QB Zach Wilson connected on a 64-yard pass to Micah Simon to set up the field goal that sent the game to overtime. The Cougars escaped with the win even though their run defense was poor, Wilson was being chased all game, and the team was outgained 418 yards to 339 yards.

Wilson had 232 passing yards in the game with a TD and no INT and Simon was the big-time target not only catching the big one late in the 4th quarter but having 127 receiving yards for the game.

Ty’Son Williams led the Cougars with 92 rushing yards and averaged 5.2 yards per carry.

USC gave up 335 yards to Stanford in their last game and in their previous game in a win over Fresno State they gave up 462 total yards.

BYU has covered the spread in their last four games after an ATS win and they are 4-1 ATS in their last five games facing a team with a winning record.

Had this game been played a year ago, we would have had it a toss up. BYU is pretty much the same team. USC is not. No reason for this not to be a tight one, in which case, we’ll gladly take the spot.