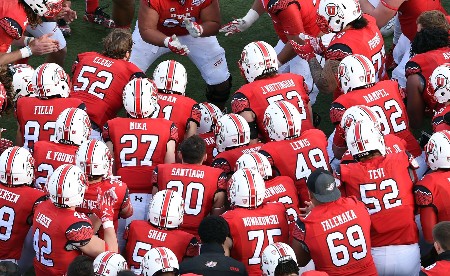 At one point early in the season, California was leading the Pac-12 after winning at Washington. One month later and Cal is fighting to get to a bowl at 4-3 overall and 1-3 in the conference.

It hasn’t been much easier for Utah, but it still has a chance to reach the Pac-12 title game, though it likely has to win out. The Utes were heavy -21.5 point home favorites with an over/under of 37.5 as of Wednesday.

They were headed for another solid season, but then their quarterback got hurt and have lost their last three, including at home to Oregon State last week. It’s been a little different for Utah, which decided to play to its strengths following the loss at USC and has allowed just 23 points in three games since.

That Utah defense will be a problem for Cal because with its backup quarterback, things haven’t been the same. The Bears have failed to score more than 17 points in the last three because Devon Modster is completing 46.1% of his passes for 5.0 yards per attempt.

Even worse is that he’s questionable to play in this one with original third stringer Spencer Brasch possibly set to start. Considering the drop off from Chase Garbers to Modster, it could get ugly quick for this offense.

They’ll try and lean on running back Christopher Brown Jr. as much as possible, but there’s a reason he hasn’t surpassed 3.3 yards per carry in the last four games and is averaging 4.0 ypc for the season.

There’s a decent chance Utah holds Cal to less than 10 points and goes for a shutout. The question is how many points the Utes can put up against a defense allowing less than 20 points per game. Cal was already defense-first before the quarterback injuries and that’s seen when they held Oregon to just 17 points.

The biggest news is the status of quarterback Tyler Huntley, who isn’t guaranteed to start due to a calf injury. He makes this offense go, averaging 10.4 yards per pass as well as 4.8 yards per carry.

Sure, the Utes can win without him, but they’re already a limited group when he’s in the game which is why they scored 21 points against ASU last weekend.

No matter who is at quarterback, Zack Moss will be fed the ball and he’s averaging 6.6 yards per carry for eight touchdowns. He’s been strong between the tackles and rush defense has been Cal’s biggest weakness, allowing 150 yards per game.

Cal has covered three of the last four, but the last meeting was 2016 and the trend dates back to 2011. If Modster doesn’t play, it’ll be hard to put money on the Golden Bears because they may not make it to the red zone. Then again, if Huntley doesn’t play for the Utes, there’s no guarantee they surpass 20 points.