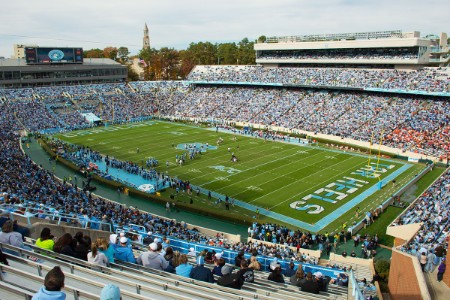 UNC will host Clemson this Saturday as 26.5 point home underdogs with a current posted total of 61 at 5 dimes sportsbook.

It wouldn’t be surprising if this ended up being the ACC title game. North Carolina may not be the best team, but it already beat Miami and is home against Virginia, who is the current leader in the Coastal division.

There aren’t many opportunities for Clemson to be challenged in the regular season and this isn’t one of them. The ACC remains bad outside of the Tigers and while the Tar Heels have had a nice start to the season, they have lost back-to-back games to Wake and App. State. Both are decent teams, but staying competitive in those games isn’t a great primer for Clemson.

Even a Bad Trevor Lawrence is Good

Trevor Lawrence hasn’t had the best start to the season, yet that hasn’t mattered. Even though he has just seven touchdowns and five interceptions, the offense has torched everyone but Texas A&M.

Once he figures things out with receivers Tee Higgins and Justyn Ross, it’s hard to see any defense stopping this talented group. That’s because the ground game has been dominant, averaging 6.6 yards per carry as a team. Travis Etienne and Lyn-J Dixon have yet to be stopped, combining for 615 rushing yards and seven touchdowns.

UNC has stayed competitive in all of its games, yet hasn’t seen this kind of offense and is still allowing 395 total yards per game. The best thing going for the Heels is that they’re fighting. They went down 21-0 in the first half against Wake and then came back and almost won in a 24-18 loss. If they can put up a fight in this game, that would be somewhat impressive, considering where they were a year ago.

Tigers Have Allowed 14 ppg or Less

The problem is that Clemson hasn’t allowed more than 14 points and UNC hasn’t played a defense nearly as good. Even with those impressive early wins, neither Miami nor South Carolina has looked good against other teams.

The Heels want to run the ball between Javonte Williams and Michael Carter, but the Tigers excel against the run, allowing less than 100 rushing yards per game. As a team, UNC averages just 3.8 yards per carry because quarterback Sam Howell has already been sacked 15 times.

That’s not a good recipe going against this Clemson defense. Speaking of Howell, his overall numbers are respectable with nine touchdowns on 8.8 yards per attempt, but this is a different level of defense. He may have a solid overall season against the rest of the ACC, but simply reaching double-digit points will be difficult in this game.

Can Tarheels Put up a Fight?

While UNC has been close in every game this year, Clemson has run through everyone but Texas A&M, including the 41-6 win at Syracuse. The Tar Heels may put up a fight, but it won’t be fun betting against Lawrence and company.

Our Pick – Our numbers have Clemson winning by anywhere from 21 to 26 points. So, a lean towards North Carolina but too close for comfort in terms of whether we have an edge.

However, this is another game where our numbers indicate betting under the total may be the way to go.

We use several different methods to come up with our own numbers. Doing so for the total, the range is anywhere from 45 to 51 which gives us quite a bit of a cushion.

Always difficult to bet an under when Clemson is involved considering it would be shocking to see them hang 60 on anyone. However, sometimes you just have to have faith in the numbers. Clemson/NC UNDER 61