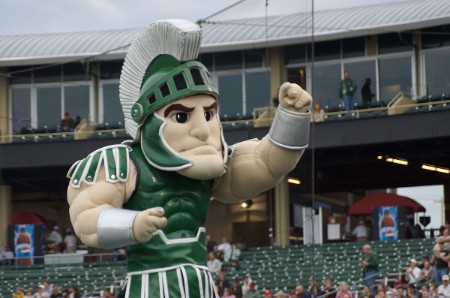 The Indiana Hoosiers travel to Michigan to take on the Spartans this Saturday as 14 point underdogs to go along with a total of 44 at betonline.

It’s four games into the season and it feels like nothing has changed for Indiana or Michigan State. The Hoosiers have the talent to beat up on weaker teams and will challenge some in the Big Ten. But they faltered against Ohio State.

The Spartans have an elite defense, but their offense continues to hold them back. They are a mystery every week.

Michigan State led the entire way of that 35-21 win last season and the defense did its job, limiting Indiana to just 29 rushing yards.

That was the main difference as that run defense put IU in a hole on almost every possession. While MSU couldn’t run the ball well either, it at least got some yards on every carry.

In addition to playing on the road, the Hoosiers have to deal with the loss of their senior left tackle and that’s not a problem you want to have against this front.

It also doesn’t help that they’ve already had trouble running the ball in the early season, averaging 3.5 yards per carry as a team behind Stevie Scott with 215 yards.

While quarterback Michael Penix is dealing with a shoulder injury, that may not matter because Peyton Ramsey has similar numbers and neither can be considered above average.

Of course, similar to last year, whoever is at quarterback will be asked to air it out because it’s unlikely Indiana will be able to run the ball against this defense.

Will Spartans Offense Show Up?

The other end is the intriguing part and will decide who covers and wins this game. The MSU offense has been defunct in games against Tulsa and Arizona State, but has at times looked seasoned in wins over Western Michigan and Northwestern.

Indiana’s defense doesn’t look much improved from a year ago, so the chances for Michigan State to move the ball will be there.

Quarterback Brian Lewerke has respectable numbers, averaging 7.4 yards per attempt, but the key stat is one interception.

As long as he doesn’t make stupid decisions and put the defense in bad situations, that’s almost all that’s needed.

Top wideouts Darrell Stewart and Cody White have been solid, but freshman running back Elijah Collins has been the bigger spark, already with 357 rushing yards on 5.9 yards per carry.

Spartan “D” Will Decide This One

People thought the spread was big last week for Michigan State, but then the offense finally clicked and it had no trouble covering against Northwestern.

If that same offense shows up, it wouldn’t be surprising if the Spartans surpassed 30 points again.

If that happens, they’ll have to hold the Hoosiers below two touchdowns and that’s a reasonable ask for this defense.

The under is 7-1 in MSU’s last eight conference games. The Spartans have covered the last seven meetings between these schools played in East Lansing and the favorite (MSU) is 5-1 ATS in the last six overall.

Our Pick – This Spartans defense is the real deal and should carry this game. Don’t expect many points from the Hoosiers, which once again puts Michigan State in a situation where even minimal offensive output get the cover.