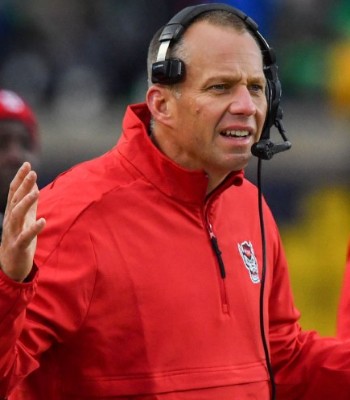 Last season East Carolina was only 3-9. In their last game of the season they were throttled losing to NC State 58-3. They lost that game by 55 points. In the season opener this time around they are only getting 17.5 points with a total sitting at 56.5.

While the Pirates were embarrassed facing the Wolfpack last season most of the money in this non-conference game has been on them. NC State opened as a 20.5-point favorite.

Last season ECU was 5-7 ATS but came nowhere near covering the spread getting 24.5 points in their bad loss to NC State.

NC State went 9-4 last season, but they have a lot of concerns heading into this season. They lost star QB Ryan Finley and his top two WR’s, who each had over 1,000 receiving yards, to the NFL. They also lost their top RB, who rushed for over 1,000 yards. The defense should be solid, but can the new guys step up? Big question for the Wolfpack this season.

Last season the Wolfpack were 6-7 ATS and they are the host in this game.

Mike Houston takes the helm as the new coach of ECU and last season as the head coach at James Madison he lost to the Wolfpack 24-13. Holton Ahlers returns under center after passing for 1,785 yards with 12 TD’s and three INT’s. He lead the team with 592 yards. He missed the NC State game with an injury and he has a lot of pressure on him in this game.

The run game is a major concern for the Pirates. Their lead RB returning is Hussein Howe, who only rushed for 236 yards last season. ECU has a few guys coming in, but can they produce against a solid NC State front line defense?

NC State was good against the run last season (ranking 29th in the nation), but only ranked 108th in pass defense. Ahlers has some talent on the outside and a good line and if he can get protection and get to the ball to the outside the Pirates have a chance.

We mentioned all the guys that NC State lost, and they have a major overhaul on the offensive side of the ball.

3rd year sophomore Matthew McKay is slated to take over under center and in limited action last season he showed some flashes as a duel-threat QB.

Freshman RB Devin Leary is a solid recruit and will likely split time with Florida State transfer Bailey Hockman in the backfield. Emeka Emezie is the leading returning WR and had 616 receiving yards last season. Thayer Thomas returns after a strong freshman campaign last season where he had 34 catches.

The strength of the Wolfpack this season will be their front line D that was legit last season and nearly remains the same. The secondary is still a concern, but if they can get to Ahlers and stuff the run there may be a blowout in this game for the 2nd straight season.

East Carolina returns several players on defense, but will the experience be enough? They ranked near the bottom of the pack in college football in pass defense and only ranked 73rd in rushing defense.

While many players on offense are gone for State in last season’s blowout win over ECU last season, they racked up 655 yards and only gave up 104.

ECU has failed to cover the spread in 20 of their last 27 road games.

Handicapping college football games in which there have been coaching changes from the previous year always present a problem and a challenge. New coaches bring new schemes and staff. They generally take some lumps before things get better.

The early money on East Carolina likely has something to do with the fact that, over the last decade, the Pirates have had the talent to compete with NC State.

These teams have played 7 times since 2005. East Carolina has won 4 of those games straight up. In 3 of the games they lost, if you gave them +17.5 points, they would have covered two of three.

So, expect a much better showing this year. Still not sure they can overcome the coaching change but we’ll stick with an approach that we use a lot in week 1.

Our Picks – East Carolina + for the 1st half and 1st quarter.