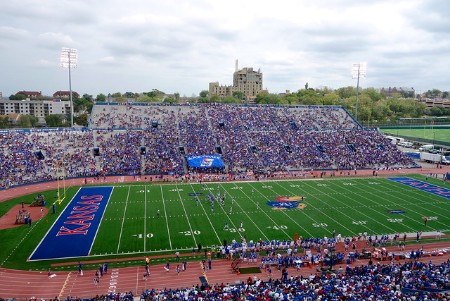 Oklahoma has yet to be challenged this season and that’s unlikely to change against Kansas. The lone worry is that the Sooners will look ahead to Texas next weekend and not cover the huge spread. They were a -33 point road favorite with an over/under of 66.5 early in the week at 5 dimes sportsbook.

Kansas has had some positives this year like beating Boston College by 24 points, but it also lost to Coastal Carolina and just gave up 51 points to TCU last weekend. If this defense couldn’t stop a mediocre TCU offense, it’s a wonder what will happen in this game.

It’s been another year of domination for Oklahoma under head coach Lincoln Riley. This year, it’s Jalen Hurts leading the charge in more of a run-heavy scheme. Of course, Hurts is also completing 77.6% of his passes for a ridiculous 15.2 yards per attempt and 12 touchdowns.

Top receivers CeeDee Lamb and Charleston Rambo are simply running into the end zone on almost every reception as they’re both averaging more than 25 yards per catch.

Then there’s still Hurts on the ground where he’s averaged 9.4 yards per carry for 443 yards and five touchdowns. The running backs are having a good season, as well, but Hurts is the talk of the offense, and for good reason.

Oklahoma has scored 48 points in every game and should have no problem hitting that number again. Kansas has shown signs of life, but it’ll be hard to back this team after what happened against TCU, allowing 319 rushing yards.

The Jayhawks still have a chance to cover mostly because OU’s defense has allowed at least 14 points in every game. The defense isn’t as bad as past years, but with this offense, the defense usually takes a back seat and its play doesn’t matter in games like this one.

That was seen last year when KU covered this game on the back of 40 points and 348 rushing yards on 9.8 yards per carry. That probably won’t happen again, but it’s something to keep in mind in this matchup as Oklahoma kind of looked ahead last year and only won 55-40.

Quarterback Carter Stanley has had some nice performances, namely the three touchdown games against WVU and BC, and at a minimum he should bounce back after a tough matchup against TCU. Either way, Pooka Williams should see a ton of work as one of KU’s last remaining running backs after a couple guys have called it quits and are aiming for redshirts.

The Jayhawks aren’t going to win this game, but Les Miles should have his guys amped up and it wouldn’t be surprising if they got a few scores again. And if KU gets three touchdowns, that would require Oklahoma to score at least 50 points to cover.

While that’s likely, it’s something to think about when betting the favorite in this spot, especially with the Red River Showdown next week.