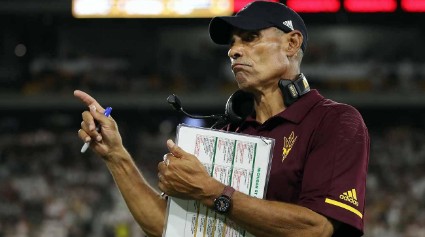 With success comes more expectations and that’s where Arizona State finds itself after a solid seven-win campaign in Herm Edwards’s first year as head coach.

Of course, the big question is who will start at quarterback for ASU in the opener. Freshman Jayden Daniels has been a popular pick in the early fall, but Dillon Sterling-Cole still has more experience with the team even though he’s rarely seen the field.

Either way, they’re expected to run through Kent State’s defense, which allowed 220 rushing yards and 36.7 points per game last year. That’s because running back Eno Benjamin is still there after running for 1,642 yards and 16 touchdowns, and the expected starting line is filtered with seniors.

It’s hard to see the Golden Flashes stopping the ground game no matter who starts at quarterback for ASU.

Covering the spread will require ASU’s defense to step up against an offense that returns its starting quarterback. KSU gets back Woody Barrett, though last year’s 11 touchdowns and nine interceptions aren’t anything to get excited about.

Most playmakers return around him with Mike Carrigan and Antwan Dixon at receiver, as well as Jo-El Shaw in the backfield. That’s nice, but it’s hard to ignore last year’s subpar 23.9 points per game scored.

Which Kent State Team Shows Up?

On one end, Kent State scored 17 points and lost to Ole Miss by 21 points, but then it also only scored six against Miami Ohio and lost by 25.

Deciphering which Kent State team is coming to play will make it easier to bet this game. The Flashes return more players, but the Sun Devils are a better overall team and still have a solid defensive group led by coordinator Danny Gonzales.

A year after allowing 25.1 points per game with one of the younger groups in the country, more is expected with a slew of sophomores in the starting lineup.

The best bet for Kent State is to hope ASU’s new quarterback struggles out of the gates and maybe throws an interception or two. If that happens, KSU will likely focus on holding onto the ball and churning the clock with the running game.

But if Benjamin runs wild early and the Sun Devils get out to an early lead, covering the 25 points won’t be as difficult, even with a new quarterback.

Arizona State opened last year covering four of its first five games, but the oddsmakers quickly realized this team wasn’t as bad as projected. It looks like the numbers are ahead of the game this year and expect another bowl campaign.

Kent State only had two wins last year, but similar to ASU, was also in its first season under a new head coach in Sean Lewis. Now in his second season, the Golden Flashes have returning talent and some hope, something that could give ASU trouble.

Generally speaking, we aren’t to fond of laying 25.5 points on any football game. To us, there’s always better opportunities on the board.

In this spot, you have a bad team from a weak conference going up against a pretty good team from a strong conference. Had they played last year, we would have had Arizona State winning by 30+ points.

Historically speaking, a 25.5 point favorite covers the number about 55% of the time. Combined with our models number using last years data, we’d do a heavy lean towards Arizona State in this one.