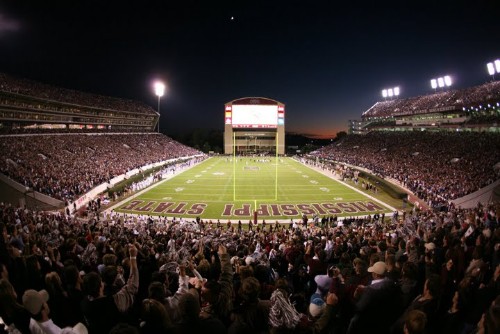 There’s no use in doubting LSU at this point. The Tigers are for real and have a legitimate shot to upend Alabama.

The question is if they can cover on the road against Mississippi State, which happens to be between Florida, Auburn and Alabama on the schedule. The Tigers were -18.5 point road favorites with an over/under of 61 as of Wednesday.

Most of the money will likely be on LSU as not many will want to take Mississippi State, who just lost to Tennessee. The question is how much playing at home matters.

The Bulldogs won their last home game against Kentucky, but they also lost to Kansas State, a middling Big 12 squad. Against a similar opponent on the road, they lost 56-23 to Auburn. There’s almost no use in looking at last year’s matchup because this is the first time in a long time LSU has a real offense.

Joe Burrow had his biggest test of the early season against Florida last week and then completed 21-of-24 passes for three touchdowns. He remains firmly in the Heisman conversation, completing 79.6% of his passes on 11.6 yards per attempt for 25 touchdowns and three interceptions.

Top receivers Justin Jefferson, Ja’Marr Chase and Terrace Marshall (out with injury) have combined for 22 of those touchdowns and are toying with secondaries. Throw in running back Clyde Edwards-Helaire with his 6.3 yards per carry and this is a complete offense.

The only thing in MSU’s favor is that it’s at home in a conference game. Yet, it already gave up 31 points to K State and couldn’t do anything against Auburn. There are few numbers that suggests MSU can contain LSU to less than 40 points.

It’s kind of similar on the other side of the ball because the offense has had trouble scoring consistently no matter who is at quarterback. Garrett Shrader was tabbed as starter for this game and there is some hope, mostly because of his legs as he’s averaging 6.3 yards per carry for 374 yards.

Otherwise, neither him nor Tommy Stevens has been a factor passing the ball with a combined eight touchdowns and six interceptions. Along with Shrader, running back Kylin Hill will see the majority of the carries and he’s averaging a solid 5.1 yards per tote.

There are at least possibilities for Miss. State to cover this game. If Shrader and Hill can move the chains and put up around 20 points, that could be enough. But LSU knows MSU wants to run the ball and that’s where its defense will focus. While at home, it’ll still be hard to trust the Bulldogs.