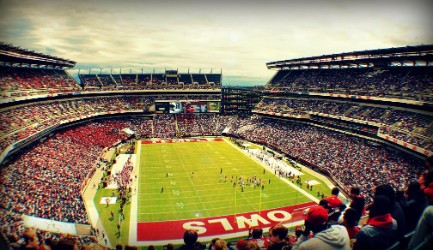 This is a battle between two of the top teams in the AAC, the 5-0 Memphis Tigers against the 4-1 Temple Owls. Memphis hasn’t faced any tough competition since Ole Miss week one, where they won 15-10.

They have been putting up a lot of points these last four weeks, including last week’s 52-33 win over UL Monroe. Freshman running back Kenneth Gainwell had a great day with 209 yards rushing and two touchdowns, while QB Brady White also impressed with a three touchdown performance.

Temple has been battle tested this year, beating a ranked Maryland team and also Georgia Tech and East Carolina. Temple has their own freshman stud running back in Re’Mahn Davis, who has over 500 yards rushing thus far paired with 4 touchdowns. His biggest game came last week when he had 157 yards and 1 touchdown.

Temple has three standout wide receivers, who take turns in staring each game. Isaiah Wright, Branden Mack and Jadan Blue are all over six feet tall, led my 6’5” Mack who is built more like a TE than WR.

Memphis is led by Damonte Coxie, 6’3” WR who is coming off of a monster year where he had 72 catches 1174 yards and an impressive 7 TD’s.

He is a little off track this year when comparing those numbers but he still has 21 catches and 301 yards and 2 TD’s. This is going to be a battle between which defense can match up the best against these standout WR’s, both teams are allowing under 166 yards per game passing which is really good.

Both of these teams have prolific offenses, but also pretty solid defenses with Memphis only allowing 19.2 ppg while Temple allows a stingy 17.2.  Last time these two played in 2016 , Memphis won a high scoring game 34-27.

Memphis is coming into Saturday’s game as 5 point road favorites, the last time a ranked team came into Philadelphia as road 5 point favorites, Temple not only covered they beat Maryland straight up.

This game looks very similar in the matchups, the high flying Tigers who average 40 ppg come in and get hit in the mouth by Temple’s hard nose defense. The over at 50.5 is tempting, but I can see this being a 20-17 type game with Memphis squeaking by with a late field goal.